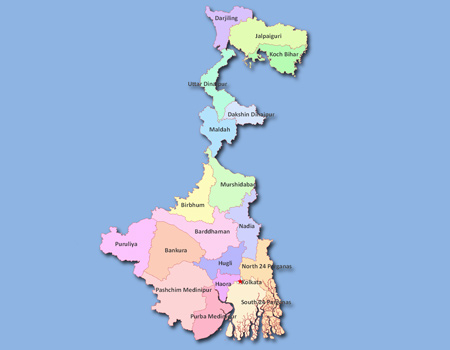 The name of Bengal or Bangla is derived from the ancient kingdom of Vanga, or Banga. In early Sanskrit literature references to the name of Banga occur, through its early history is almost obscure until the 3rd century BC. However, Stone Age tools dating back 20,000 years have been excavated in the State. Remnants of civilization in this region date back four thousand years, when the region was settled by Dravidian, Tibet-Burman, and Austro-Asiatic peoples. The region was a part of the Vanga kingdom of ancient India. The kingdom of Magadha was formed in the 7th century BC, consisting of the Bihar and Bengal regions. It was one of the four main kingdoms of India at period of Mahaveera and Buddha, and was consisted of several Janapadas. During the rule of dynasty, the Magadha Empire extended over nearly all of South Asia, including Afghanistan and parts of Persia under Ashoka the Great in the 3rd century BC. Bengal was referred to as Gangaridai by the ancient Greeks around 100 BC, meaning, speculatively, a land with the river Ganga in its heart. From the 3rd to the 6th centuries AD, the kingdom of Magadha served as the seat of the Gupta Empire. The first recorded independent king of Bengal was Shashanka, reigning around the early 7th century. After a period of anarchy, the Buddhist Pala dynasty ruled the region for four hundred years, followed by a snorter region of the Hindu Sena dynasty.

During the 12th century Islam made its first appearance in Bengal when the Sufi missionaries arrived. Later, occasional Muslim raiders reinforced the process of conversion by building mosques, madrassas, and Sufi Khanqahh. During the 14th century, the former Kingdom became known as the Sultanate of Bengal, ruled intermittently with the Sultanate of Delhi. Bengal was ruled by various Muslim rulers and governors till the Mughal period in the 16th century.

After the Mughals, history of modern Bengal begins with the advent of Europeans, more precisely, with the English trading companies. The battle of Plassey in 1757 changed the course of history when the English first gained a strong foothold in Bengal and India as well. Bengal was partitioned in 1905 to achieve some political returns, but people's growing movement led to the reunion in 1911, under the auspices of the Congress. This triggered off pectic movement for freedom which culminated with the Independence in 1947, and partition.

After 1947, the merger of native princely States began which ended with its final reorganisation in 1956 (as per Recommendations of the States Reorganisation Act, 1956) when some Bengali speaking areas of a neighbouring State were transferred to West Bengal.

The land frontiers of the State touch Bangladesh in the east and are separated from Nepal in the west, Bhutan lies in the north-east, while Sikkim is on the north. On the west are the States of Bihar and Jharkhand, while in the south lies Odisha, and the Bay of Bengal washes its southern frontiers.

Agriculture is the main source of income for about 70 per cent of the population. Jute and rice are the principal crops grown in the State, along with tea, maize tobacco and sugarcane. The State Government is concerned with activities relating to policy decisions on agricultural producing and productivity, and its extension through technology generation, transfer of technology, ensuring availability and timely distribution of agriculture inputs specially seeds, fertilizers, subsidy, credit etc. along with support service through soil testing, soil conservations, water conservations, seed testing, seed certification, plan production, quality control of fertilizers and pesticides etc.

Provision of electricity is one of the vital infrastructural inputs for the socio-economic development of any nation. It is a critical key for accelerating economic growth, generation of employment, elimination of poverty and an essential input for human development. The Power Sector in West Bengal is predominantly thermal in view of the easy and cheaper availability of cost and in the overall; the State has an adverse hydel: thermal power mix 3:97. The last five-six years have marked a remarkable turnaround in performance of the sectoral business scenario in the State. On the other hand significant ground has been broken in the renewable energy sector in West Bengal. WBREDA the nodal agency for implementation of technology demonstration projects in the State, have benefited a large number of remote villages in the Sundarbans, parts of West Midnapur and Bankura and ares of Malda, Murshidabad.

Transport Department is primarily responsible for providing better transportation facilities both for passengers and goods by way of formulation and implementation of policies and creation of Transport oriented infrastructures. The State Transport Undertakings are playing a Pivotal role in reference to the social commitment aspect of the Government.

The Transport Department was implemented schemes like Traffic Study, Study on Metro alignment, and feasibility studies on extension of Metro Railway, Decentralisation Plan of Zilla Parishad/Urban Local Bodies with other schemes.

Durga Puja is the most important festival along with Kali Puja or Diwali besides Vasant Panchami, Lakshmi Puja, Holi, Sivaratri, Janmasthami, Id-ul-Fitr, etc.