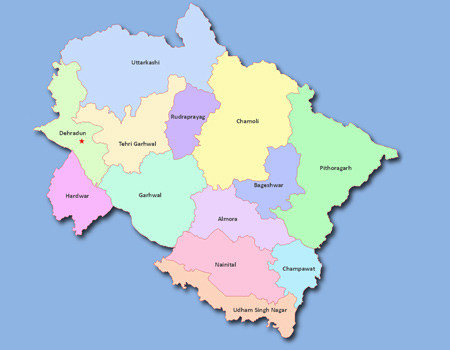 Uttarakhand finds mention in the ancient Hindu scriptures as Kedarkhand, Manaskhand and Himavant. The Kushanas, Kunindas, Kanishka, Samudra Gupta, the Pauravas, Katuris, Palas, the Chandras and Panwars and the British have ruled it in turns. It is often called the Land of the Gods (Dev Bhoomi)because of its various holy places and abundant shrines. The hilly regions of Uttarakhand offer pristine landscapes to the tourists.

Located in the foothills of the Himalayas, the State has international boundaries with China (Tibet) in the north and Nepal in the east. On its north-west lies Himachal Pradesh while on the south is Uttar Pradesh.

About 90 per cent of the population of Uttarakhand depends on agriculture. The total cultivated area in the State is 7,67,571 hectare.

The State is rich in mineral deposits like limestone, marble, rock phosphate, dolomite, magnesite, copper greyphyte, gypsum, etc. The number of small-scale industries is 34,231 providing employment to 1,77,677 persons, with an investment of ? 14,965.67 crore.

Agricultural land under irrigation is 5,49,381 hectare. The State has excellent potential for hydropower generation. There are a number of hydroelectric projects on the rivers Yamuna, Bhagirathi, Bhilangana, Alaknanda, Mandakini, Saryu Gauri, Kosi and Kali generating electricity. Total hydropower potential approx. 25,450 MW. Projects allotted to various agencies 13,667 MW. Out of 15,761 villages, 15,241 villages have been electrified.

Roads:  The total length of metalled roads in Uttarakhand is 29,939 km. The length of PWD roads is 22,623 km. The length of roads built by local bodies is 15,041 km.
Railways: The main railway stations are Dehradun, Hardwar, Roorkee, Kotdwar, Kashipur, Udhamsingh Nagar, Haldwani, Ramnagar and Kathgodam.
Aviation:There are air strips at Jolly Grant (Dehradun), and Pantnagar (Udham Singh Nagar). Air strips at Naini-Seni (Pithoragarh), Gauchar (Chamoli) and Chinyalisaur (Uttarkashi) are under construction. From this year Pawan Hans Ltd., has started helicopter service from Rudraprayag to Kedarnath for pilgrims.