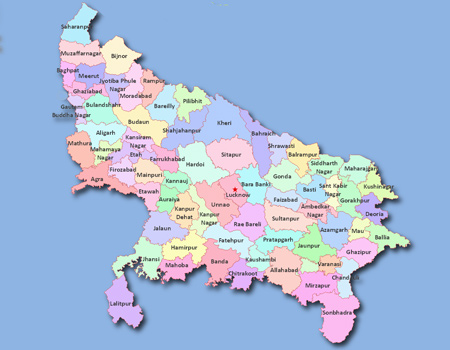 The history of Uttar Pradesh is very ancient and interesting. It is recognised in the later Vedic Age as Brahmarshi Desha or Madhya Desha. Many great sages of the Vedic times like Bhardwaja, Gautam, Yagyavalkaya, Vashishtha, Vishwamitra and Valmiki flourished in this state. Several sacred books of the Aryans were also composed here. Two great epics of India, Ramayana and Mahabharata, appear to have been inspired by Uttar Pradesh.

In the sixth century BC Uttar Pradesh was associated with two new religions— Jainism and Buddhism. It was at Sarnath that Buddha preached his first sermon and laid the foundations of his order and it was in Kushinagar in Uttar Pradesh where Buddha breathed his last. Several centres in Uttar Pradesh like Ayodhya, Prayag, Varanasi and Mathura became reputed centres of learning. In the medieval period Uttar Pradesh passed under Muslim rule and led the way to new synthesis of Hindu and Islamic cultures. Ramananda and his Muslim disciple Kabir, Tulsidas, Surdas and many other intellectuals contributed to the growth of Hindi and other languages.

Agriculture is the main occupation of 66 per cent of the population of the State. The net cultivated area in the state is 164.17 lakh hectare.

There were 6,12,338 Small Scale Industries with involving a total investment of 7172 crores, as per earlier records.Under the public sector, mining of limestone, magnesite, coal, rock phosphate, dolomite and silicon-sand is carried out. The bulk production of minor and some of the major minerals like limestone, silica-sand, magnesite, pyrophyllite and diaspore is mostly with the private sector. Important mineral based industries include large cement plants in Sonebhadra.

UP Power Corporation, UP State Power Generation and UP Hydel Power Corporation had been formed by reorganising UP State Electricity Board on 14 January 2000. During 2001-02 the total installed capacity was 4659 MW, in 2006-07 it was 5011 MW which has now been raised upto 5077 MW.

Power is an important input to accelerate the process of economic growth. The installed capacity of re-organized Uttar Pradesh during Tenth Five Year Plan was 7821.82 MW. Only 56.6 per cent of 97135 villages were electrified and 7.88 lakh private tubewells were energized. At the time of inception the total installed capacity of UPSEB, including thermal and hydro, was 2,635 MW which has now been raised to 5414 MW.

The biggest congregation, perhaps of the world, Kumbha Mela is held at Allahabad every twelfth year and Ardh kumbh Mela every sixth year. Magh Mela is also held at Allahabad in January when the people come in large numbers to have a dip in the holy Sangam. Among other fairs is the fortnight long Jhoola fair of Mathura, Vrindavan and Ayodhya, when dolls are placed in gold and silver jhoolas or cradles. A dip in the Ganga on Kartik Poornamasi is supposed to be the holiest and there are big congregations at Garhmukteshwar, Soran, Rajghat, Kakora, Bithur, Kanpur, Allahabad, Varanasi and Ayodhya. A famous cattle fair is held at Bateswar in Agra district. Dewa in Barabanki district has become famous because of the Muslim saint Waris Ali Shah. Besides, important festivals of the Hindus, Muslims, etc., are widely celebrated in the state.