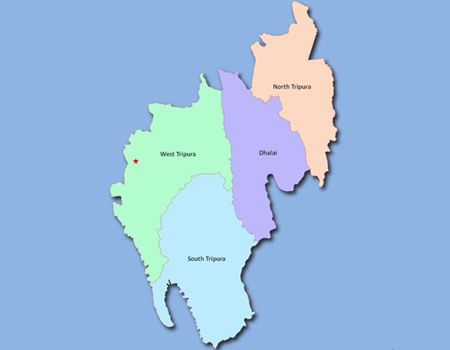 Tripura has its unique tribal culture and a fascinating folklore. The history of Tripura can be learnt from 'Rajmala' chronicles of king Tripura and writings of historians. There are references of Tripura even in the Mahabharata and the Fur anas. According to 'Rajmala', the rulers were known by the surname 'Fa' meaning 'father'. There is a reference to rulers of Bengal helping Tripura kings in the 14th century. Kings of Tripura had to face frequent Mughal invasions with varying successes. They defeated the Sultans of Bengal in several battles. Nineteenth century marked the beginning of the modern era in Tripura when king Maharaja Bir Chandra Kishore Manikya Bahadur modelled his administrative set-up on the British India pattern and brought in various reforms. His successors ruled Tripura till 15 October 1949 when the State merged with the Indian Union. Initially, a part 'C State, it became a Centrally administered territory with the re-organisation of States in 1956. In 1972, Tripura attained the Status of a full-fledged state.

Tripura is strategically situated between the river valleys of Myanmar and Bangladesh. Encircled almost on three sides by Bangladesh, it is linked with Assam and Mizoram in the north-east.

According to final results of 2001 census, the state's population stood at 31.99 lakh, with a density of 305 persons per sq. km. In 2006, the estimated mid-decade population of the state was 34,74,000 comprising 17,79,000 males and 16,95,000 females. The birth rate in the state in the year 2006 was 16.6 per thousand which was the lowest in northeastern region, much lower than the national average of 23.5. Again, in 2006, its death rate was 6.3 per thousand which was much below the all India average of 8.1 and was second lowest after Mizoram. There are 19 sub-tribes among the scheduled tribes in the state with their own distinctive cultures.

Population pattern and demography have always been sensitive issues in Tripura over the past century which saw an actual decline in indigenous tribal population in terms of percentage because of resettlement of non-tribals in the state, particularly in the aftermath of the partition of the country in 1947. In 1901 Tripura's population was 1.73 lakh, with tribals making up nearly 52.89 per cent of the whole. By 1941, the total population rose to 5.13 lakh with a barely 50.09 per cent tribal majority. But by 1981, the tribal population dipped to 28.44 per cent of a total population of 2.05 million. Evidently, the tribal people were reduced from over a half to barely more than a quarter of the state's population in a century. The demographic changes, the economic pressures created by the sudden influx of people and the spread of education through missionary influence among the Mizos, Kukis and other tribes, have generated new impulses and a mix of expectations and aspirations. A feature of note is that around 97.4 per cent of the tribal population is rural. Human development among tribal people is thus very closely tied to the evolution of the rural economy.

Agriculture forms the primary sector of Tripura's economy as it does in other states of northeastern region. More than 75% of the state's total workforce is still dependent on agriculture for their subsistence. In fact, about 24.3 % of the state's net area is reserved for agricultural purposes, of which about 2.5 lakh hectares fall under the net cultivated area. Paddy is the principal crop that is reaped in Tripura. Besides paddy, jute, sugarcane, wheat, oilseeds, coconut and turmeric are also grown in plenty in this northeast Indian state. The state takes elaborate measures to spruce up the agricultural infrastructure. New technologies, fertilizers, improved seeds and protective chemicals have been introduced with a great deal of success to keep the state's agriculture in healthy shape.

The remote location, lack of power facilities as well as a well developed transport and communication network had hindered the growth and development of Tripura until the year 1950. However, today a number of small scale industries have grown in the state based on the manufacture and production of handicrafts and handloom products, rubber, bamboo, jute and tea. Natural gas and fruit processing units have also sprung up in the state.

Tripura Handloom and Handicraft Development Corporation Ltd. is employing a whole array of novel marketing schemes to market the local handicraft items. The state is also a repository of glass sand, clay, lignite and building material. The latent hydro electric potential of the state is also being exploited to further the state's industrial development. Five major industrial estates have come up at Dharmanagar and Kumarghat areas of north Tripura , Arundhatinagar and Dukli areas of west Tripura and Dhwajanagar area of south Tripura district of the state while three industrial centres have also been set up in Agartala, Udaipur and Kailashahar.

Tripura is a predominantly hilly State having geographical area of 10,49,169 hectare. Amid the undulating terrain the recently assessed Land under cultivation is 2,55,241 hectares. Presently assessed Irrigable Land is 1,17,00 hectares. Area brought under Irrigation is 1,08,646 hectares up to 31st March, 2011, which is 92.86% of Irrigable area and 42.57% of cultivable land.

Tripura, nestled in a tip of the Northeast, flourishes on the bounties of nature but the beauty of the state is heightened by its human resources on the one hand and rich cultural tradition on the other.

Folk culture of the tribal and non-tribal people of the state forms the backbone of Tripura's cultural tradition. This is reflected as much in the delicately rhythmic physical movement of the 'Hoza Giri' dance of the Reang tribesmen as in the collective musical recitation of 'Manasa Mangal' or 'Kirtan' (devotional songs in chorus) of the non-tribals. Apart from this, the 'Garia' dance of the tribals, organized on the occasion of New Year festivities and worship of 'Garia', and 'Dhamail' dance of the non-tribals, organized on familial occasions like wedding ceremony in rural areas as well as musical duels (Kabi Gaan) between two rival rhyme-makers on public platforms form the staple of Tripura's folk culture. Enriched by myths and legends of tribal society over the past half a millennium, Tripura's folk culture now confronts a major threat from so-called modernity. Gone are the days when rhythmic movement of artists in 'Garia' or 'Dhamail' dance would keep viewers awake all through the night. These forms of culture have been falling prey to invasion of modernity as western musical instruments like guitar, mandolin etc keep replacing the traditional instruments like indigenous drums and flutes and western 'break dance' push aside the pristine purity of the 'Garia' dance or 'Dhamail'. However, cultural programmes, marked by songs and dances, associated with birth anniversaries of great poets and lyricists Rabindra Nath Tagore and Kazi Nazrul Islam add colour and charm to the state's multi-layered cultural mosaic enriched by contributions from many streams of sub-culture.

Tripura offers great opportunities for investment in natural resource-based industries as well as in service sector ventures. The major available resources in the State are as follows:

Currently, there are six (6) industrial Estates/ Areas. Besides, an Industrial Growth Centre Project has already been completed at Bodhjungnagar, Tripura (West district). The work on setting up an Export Promotion Industrial Park (EPIP) and a Food Park has been taken up in an area adjacent to the Industrial Growth Centre. The infrastructure facilities at Land Custom Stations are being upgraded to facilitate the import/ export trade with Bangladesh.

The Department of Industries & Commerce was established to promote Village and Small-scale industries as well as medium and large scale industries in the State. While efforts are being made to promote entrepreneurship within the State, the outside investors in the public and private sectors are also encouraged both for their financial capabilities and technical expertise, for the medium and large-scale units.

In conformity with the national policy of revitalization of the rural economy, the Govt. has placed highest priority on the development of Small Scale, Village & Traditional Industries considering the fact that more than 80% of Tripura's population live in villages and the state's traditional industries are village oriented. All techno-economic assistance like EDP training etc are being provided to the new generation entrepreneurs right from identification of the project to its implementation.

The major existing industrial area is the Industrial Growth Centre Complex at Bodhjungnagar which also includes Food Park, Rubber Park and Export Promotion Industrial Park. The other industrial sites near Agartala as the main business and industrial centres are Dukli, Arundhatinagar and Badharghat. In addition, Kumarghat in Kailasahar subdivision of north Tripura is also located close to a potential industrial and business centre.

In Tripura, the mineral resources are minor amounts of glass sands, limestone, plastic clay and hard rock and all of these materials are being used in varying degrees. Setting up of ceramic tiles unit and other mineral based industries are being encouraged in the private sector. Efforts will also be made to set up Plastic Clay and Glass Sand industries where natural gas has added advantage of being used as a fuel.

Tripura is a small but picturesque State in the North Eastern Region of the country. The area of the State is about 10,491,69 sq kms. To its North, South and South East Tripura have an international boundary with Bangladesh while to its East; it shares a common boundary with two Indian States of Assam and Mizoram. There are 19 ethnic tribes, Bengali, Manipuri and others, inhabit this panoramic tiny State.

The scenic beauty of Tripura, its rich and varied culture, archaeology and architecture, its handloom and handicraft which is exquisite in color, excellent in design and craftsmanship, its verdant forests, and lakes, its excellent bracing climatic conditions, its enhancing and abounding floral treasures and panoramic view points and above all its very hospitable ethnic population are so attractive that any one who visits the State once cannot resist his temptation to come offender.