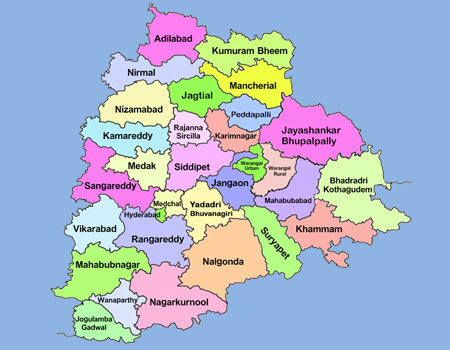 Telangana is the 29th state of India, formed on the 2nd of June 2014. The state has an area of 1,14,840 Sq Km and has a population of 3,52,86,757. The Telangana region was part of the Hyderabad state from Sept 17th 1948 to Nov 1st 1956, until it was merged with Andhra state to form the Andhra Pradesh state. After decades of movement for a separate State, Telangana was created by passing the AP State Reorganization Bill in both houses of Parliament. Telangana is surrounded by Maharashtra and Chhattisgarh in the North, Karnataka in the West and Andhra Pradesh in the South and East directions. Major cities of the state include Hyderabad, Warangal, Nizamabad and Karimnagar.

Telangana is a semi-arid area and has a predominantly hot and dry climate. Summers start in March, and peak in May with average high temperatures in the 42 °C (108 °F) range. The monsoon arrives in June and lasts until September with about 755 mm (29.7 inches) of precipitation. A dry, mild winter starts in late November and lasts until early February with little humidity and average temperatures in the 22–23 °C (72–73 °F) range.

The Economy of Telangana is mainly driven by agriculture. Two important rivers of India, the Godavari and Krishna, flow through the state, providing irrigation. Farmers in Telangana mainly depend on rain-fed water sources for irrigation. Rice is the major food crop. other important crops are cotton, sugar cane, mango and tobacco are the local crops. Recently, crops used for vegetable oil production such as sunflower and peanuts have gained favour. There are many multi-state irrigation projects in development, including Godavari River Basin Irrigation Projects and Nagarjuna Sagar Dam, the world's highest masonry dam. The state has also started to focus on the fields of information technology and biotechnology. Telangana is one of top IT exporting states of India. There are 68 Special Economic Zones in the state. Telangana is a mineral-rich state, with coal reserves at Singareni Colleries.

'South of North and North of South,’ Telangana State has long been a meeting place for diverse languages and cultures. It is easily the best example for India’s composite culture, pluralism and inclusiveness. Located on the uplands of Deccan plateau, Telangana is the link between the North and South of India. It is thus no surprise that the region on the whole came to be known for its Ganga-Jamuna Tehzeeb and the capital Hyderabad as a ‘miniature India!’. Geography, Polity and Economy of the region determined the culture of Telangana. Satavahanas, the earliest known rulers of the region sowed the seeds of independent and self-sufficient village economy, the relics of which can be felt even today. In the medieval times, the Kakatiya dynasty's rule, between the 11th and 14th centuries with Warangal as their capital, and subsequently the Qutub Shahis and Asafjahis, who ruled the Hyderabad state defined the culture of the region.

The Telangana government has announced the following four icons for the new State:

These icons reflect the culture and tradition of Telangana state and three of them - Tangedu flowers, Blue Jay and Jammi Chettu - are associated with the popular festivals of Batukamma and Dasara. While Tangedu flowers are used in stacking of Batukammas, spotting the Blue Jay on Dasara is considered a good omen and people worship Jammi Chettu on that day.