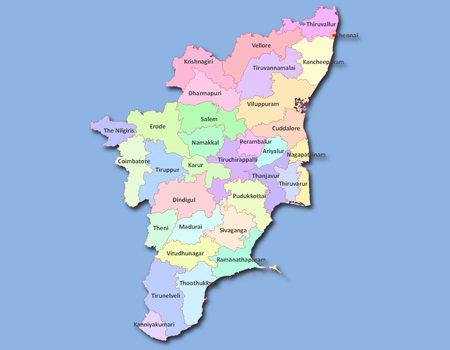 Tamil Nadu has a hoary antiquity. Though early sangam classics throw historical references it is only from the Pallavas we pass to recorded history.

South India had remained under the hegemony of the Cholas, the Cheras and the Pandyas for centuries. The Pallavas held supremacy from about the second quarter of the fourth century AD. They were the originators of the famous Dravidian style of temple architecture. The last Pallava ruler was Aparajita in whose reign the later Cholas under Vijayalaya and Aditya asserted themselves by about the 10th century. At the end of the 11th century, Tamil Nadu was ruled by several dynasties like the Chalukyas, Cholas and Pandyas. In the two centuries that followed, the imperial Cholas gained paramountcy over South India.

Muslims gradually strengthened their position, which led to the establishment of the Bahamani Sultanate, by the middle of the 14th century. At the same time, the Vijayanagar Kingdom quickly consolidated itself and extended its sway over the whole of South India and at the close of the century, Vijayanagar became the supreme power in South. However, it crumbled at the battle of Talikota in 1564 to the confederate forces of the Deccan Sultans.

Even during the period of the tumultuous confusion that followed the battle of Talikota, European commercial interest had appeared as rivals in the area of South India. The Portuguese, the Dutch, the French and the English came in quick succession and established trading centres known as 'Factories/ East India Company which had established their factory at Masulipatnam, now in Andhra Pradesh, in 1611 gradually annexed territories by encouraging enmity among the native rulers. Tamil Nadu was one of the first of British settlements in India. The State is the successor to the old Madras Presidency which in 1901 covered the bulk of the southern peninsula. The composite Madras State was later reorganised and the present Tamil Nadu was formed.

Tamil Nadu is bounded on north by Andhra Pradesh and Karnataka, on west by Kerala, on east by the Bay of Bengal and on south by the Indian Ocean.

Agriculture is the major occupation in Tamil Nadu. The total cultivated area in the State was 57.53 lakh hectares in 2010-11. The principal food crops include paddy, millets and pulses. Commercial crops include sugarcane, cotton, sunflower, coconut, cashew, chillies, gingelly and groundnut. Plantation crops are tea, coffee, cardamom and rubber. Major forest produces are timber, sandalwood, pulp wood and fuel wood. Tamil Nadu occupies a premier position in the production and extensive application of bio-fertilizers. Efforts are on to improve farming technologies so as to increase yields in the low rainfall areas of the State. Annual food grains production in the year 2010-11 was 75.94 lakh Tonnes.

Knowledge based industries like I.T. and Biotechnology have become the thrust area in the industrial scene in Tamil Nadu. TIDEL, a software technology park, has been established in Tharamani, Chennai. Top I.T. and Telecom companies such as Nokia, Motorola, Foxconn, Flextronic and Dell have commenced production in the State.

The Gross Area Irrigated for Foodgrains was 26.97 lakh hectares and 6.51 lakh hectare was for Non-foodgrains.

The total installed capacity of electricity in the State of the year 2011-12 is 17,936.56 MW. The installed capacity of State Sector is 5,677 MW and that of Private Sector is 1,180 MW. Apart from this 2861 MW is available as share from Central Sector, 305 MW is obtained from external assistance and 214 MW from Captive Power Plants. Besides wind mills from the private sector provide 6,696.61 MW and 610 MW is received from co-generation plants and 161.15 MW from Bio-mass plants.

Roads: The length of roads network in Tamil Nadu is 62,017 km.
Railways: The total length of railways is 3,761 km and the main junction stations are Chennai, Tiruchirapalli, Madurai, Tirunelveli, Nagercoil, Coimbatore, Erode, Salem, Jolarpettai, Katpadi and Arakkonam.
Aviation: Chennai being the international airport in the southern region, is the main centre of airline routes. Besides, there are airports at Tiruchirapalli, Madurai, Coimbatore and Salem.
Ports:  Major ports in the State are Chennai, Egmore and Thoothukudi. There are 15 other minor ports including Cuddalore, Nagapattinam, Rameswaram, Pamban, Colachel, Kanniyakumari, Valinokkam, Ennore Minor Port, PY-3 Oil Field, Thirukkadaiyur, Kudankulam, Thiruchopuram, Punnakkayal, Manappad and Kattupallil.

Pongal is the harvest festival celebrated by the farmers in January to worship the sun, the earth and the cattle as thanks giving for a bounteous harvest. Pongal festival is followed by the Jallikattu-Bull fight, in some parts of southern Tamil Nadu. Alanganallur in Tamil Nadu is internationally famous for Jallikattu - Bull fight. Chithirai festival, Madurai brings a spectacular re-enactment of the marriage of the Pandiyan princess Meenakshi to Lord Sundareswarar. Adipperukku is a festival celebrated on the 18th day of Tamil month, Adi, on the banks of rivers. It marks the commencement of new farming operations. Dance Festival, Mamallapuram, which is set before an open air stage, created 13 centuries ago the incredible monolithic rock sculptures of the Pallavas, next to the sea in this ancient city of Mamallapuram. Bharatha Natyam, Kuchipudi, Kathakali, and Odissi are some dance forms presented by the very best exponents of the art besides folk dances. At the Natyanjali Dance Festival, the temple city of Chidambaram pays special tribute to Lord Nataraja the 'Cosmic Dancer'.

Mahamagam Festival is a holy festival that brings pilgrims to Kumbakonam once in 12 years - the temple city that gets its name from Kumbha - the divine pot. The summer festival is held every year in the 'Queen of Hill Stations', the evergreen Ooty, the exquisite Kodaikkanal or the salubrious heights of Yercaud. Kanthuri Festival is a truly secular festival, where devotees flock to the shrine of saint Quadirwali. One of the descendants of the Saint is chosen as a Peer or spiritual leader, and is honoured with offerings. On the tenth day of the festival, the Saint's tomb is anointed with sandalwood, and later the holy sandal paste is distributed to everyone. Wondrous legends surround the church, the most famous being that of the ship wrecked Portuguese sailors, who in the 16th century, vowed to build a great shrine for the Virgin Mary, for saving their lives in a terrible storm. The Velankanni festival attracts thousands, clad in orange robes to the sacred spot where the ship landed. Equally famous are the Virgin Mary's miraculous healing powers, earning for the church the name 'Lourdes of the East'.

The Navarathiri Festival, literally means the festival of 'nine nights', taking unique and different forms in different states of India, all to propitiate the goddess Sakthi, for power, wealth and knowledge. Rows of glittering earthen lamps outside every home and joyous burst of fire crackers mark Tamil Nadu's Festival of lights, Karthigai Deepam. In December, Chennai celebrates her priceless heritage of carnatic music and dance at its Music Festival to present a galaxy of star artistes, old and new.