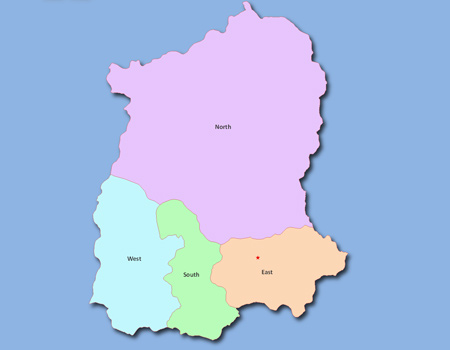 The early history of Sikkim starts in the 13th century with the signing of a blood-brotherhood treaty between the Lepcha Chiefain Thekong Tek and Bhutia Chieftain Khye-Bumsa at Kabi Lungtsok in North Sikkim. This follows the historic visit of three revered Lamas to Yuksam in 1641 in West Sikkim where they consecrated Phuntsog Namgyal, a sixth generation descendant of Khye-Bumsa as the first Chogyal of Sikkim, thus heralding the beginning of the Namgyal dynasty in Sikkim. With the march of history, events in Sikkim saw the process of democratisation and became an integral part of the Indian Union in 1975. Sikkim, the land blessed by Guru Padmasambhava during his sojourn to Tibet in 8th century, are inhabited by people from different communities and live in total harmony. Sikkim is perhaps the most peaceful State of the Indian Union to promote communal harmony, a feat which is much to be expected in a plural society like India. The Sikkim Democratic Front Government headed by Shri, Pawan Chamling, Chief Minister is in power in Sikkim since 12th December, 1994.

In the agriculture sector, Government has made immense breakthrough with the introduction of crops like baby corn, sweet corn, etc. bringing manifold increase in income to the farming community. Focus is on crops which can grow under moisture stress conditions and which have high global demands of the likes of buckwheat, millet and such other cereals.

Though Sikkim has been declared an industrially backward state, the existence of craftsmanship based traditional Sikkimese cottage industries dates back to several centuries. Lepcha's skill in bamboo-craft, woodwork, spinning of yarn and carpet weaving in traditional textures, Bhutia's excellence in ancient Tibetan practice of carpet and rug weaving and Nepali's celebrated craftsmanship of their metalwork, silverware and woodwork are very exclusive.

Sikkim Jewels Limited is one of the sophisticated and precision oriented industries for the manufacture of jewel bearings for electric meters, water meters and other measuring instruments like watches and clocks. Ten ancillary units have been set up to manufacture watch jewels. The SIDICO provides long-term loans for cottage, tiny, small and medium scale industrial units, hotels, hospitals, nursing homes and taxis.

The Department of Irrigation and Flood Control has covered 3866.68 hectares of agricultural land in eleventh five year plan 225 numbers of scheme were sanctioned under the Accelerated Irrigation Benefit programme during the year 2010-11 by the Union Ministry of Water Resources which are to be implemented during the three financial years beginning 2010-11. It is expected that most of the schemes to be completed within the anticipated period.

The total Hydro Power Potential of Sikkim as assessed by Central Water Commission, Government of India is around 8,000 MW. With the view to harness the immense hydro power potential of the State, the Government of Sikkim in the year 2004 constituted the Hydro Committee to examine the various aspects related to hydro power development and make recommendations for early implementation of the hydro power projects. The State Government had signed Implementation Agreements for 32 numbers of hydroelectric power projects with a total installed capacity of around 4300 MW to various Independent Power Producers (IPPs) including NHPC. As on date, the Implementation Agreements stand valid for only 20 Nos. of power projects of which two projects namely-510 MW Teesta-IV HEP and 60 MW Rangit-II HEP have been already commissioned and the remaining 18 projects with total installed capacity of 3774.50 MW are under various stages of execution.

Roads:  Gangtok is connected by roads with Darjeeling district of West Bengal and also with all the district headquarters within Sikkim. The total road length of the State is 3,672.32 km. and 216 bridges. Which includes 873.40 km road maintained by the Border Roads Organisation.
Railways and Aviation: The closest railway stations are Siliguri (113) and New Jalpaiguri (125 km) connecting Kolkata, Delhi and other important cities and Bagdogra airport. Green field airport is being constructed at Pakyong in East Sikkim. There is a regular helicopter service between Gangtok and Bagdogra.

The State Government has made encouraging steps to improve the lives of common people through several IT-oriented projects. To meet the objectives various initiatives hae been taken like the establishment of 45 Community Service Centre's (CSCs) and State State-wide Area Network (SWAN) all across the state even in remote areas as a step to bring IT to the grass root level of people. This has gretly increased the government's interface with the public and enhanced the quality of some state services. CSC in Sherethang which is an achievement for the State Government and its citizens is declared as the highest cyber cafe in the world by the Limca Book of Records. The Department since its establishment, has trained about 15000 government employees and unemployed youths. Short orientation courses on various software applications that have been developed by DIT are also being undertaken on a regular basis. Launching of the official website of the Government of Sikkim www.sikkim.gov.in by the Department of IT is another achievement.

Situated in the eastern Himalayas, Sikkim is one of the most beautiful States of the Indian Union. It is home to the third highest mountain in the world, Mt Khangchendzonga which is also worshipped as the Guardian deity. Sikkim is adorned with snowy mountains, luxuriant forests with exotic flora and fauna, pristine waterfalls, sacred lakes, holy caves, medicinal hot-springs, cascading rivers and gentle streams making it a tourist destination for all seasons. An interlace of mixed culture of various communities residing here, the State celebrates festivals and activities of each other with grand fervor. There are tours for everyone, from those seeking solitude for meditation to the adventurous or those seeking leisure holiday. For the more adventurous there is trekking in the mountains, river rafting, bird watching, mountain biking, rock climbing, paragliding and angling as well as the mountain flights for experiencing the snow clad mountains.