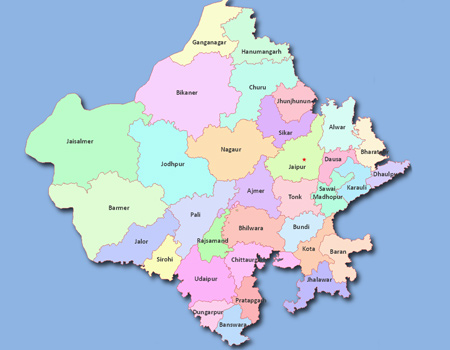 Rajasthan, the largest State in India area-wise prior to Independence was known as Rajputana. The Rajputs, a martial community, ruled over this area for centuries.The history of Rajasthan dates back to the pre-historic times. Around 3,000 andI, 000 BC, it had a culture akin to that of the Indus Valley civilisation. It were the Chauhans who dominated Rajput affairs from seventh century and by 12th century they had become an imperial power. After the Chauhans, the Guhilots of Mewar who controlled the destiny of the warring tribes. Besides Mewar, the other historically prominent States were Marwar, Jaipur, Bundi, Kota, Bharatpur and Alwar. Other States were only offshoots of these. All these states accepted the British Treaty of Subordinate Alliance in 1818 protecting the interests of the princes. This naturally left the people discontented.

After the revolt of 1857, the people united themselves under the leadership of Mahatma Gandhi to contribute to the freedom movement. With the introduction of provincial autonomy in 1935 in British India, an agitation for civil liberties and political rights became stronger in Rajasthan. The process of uniting scattered States commenced from 1948 to 1956 when the States Reorganisation Act was promulgated. First came Matsya Union (1948) consisting of a fraction of States, then, slowly and gradually other States merged with this Union. By 1949, Major States like Bikaner, Jaipur, Jodhpur and Jaisalmer joined this Union making it the United State of Greater Rajasthan. Ultimately in 1958, the present State of Rajasthan formally came into being, with Ajmer state, the Abu Road Taluka and Sunel Tappa joining it.The entire western flank of the State borders with Pakistan, while Punjab in North Haryana in north east, Uttar Pradesh and Madhya Pradesh in south east and Gujarat in south west of the state.

79 verities of minerals found in the state, out of these, state produces 58 varieties of minerals. 100% production of major mineral like Zinc, Wollastonite, Jasper, Garnet (Gem), comes from state. State has maximum varieties of miner minerals. State also producing the Oil and Natural Gas from Mangala, Vijiya,Bayatu etc. areas of Barmer district. In addition to this the major production of mineral like calcite, Soapstone, Lead Ore, Asbestos, Rock Phosphate, Felspar, Silver Ore, Marble, Sandstone etc.l comes from the state.