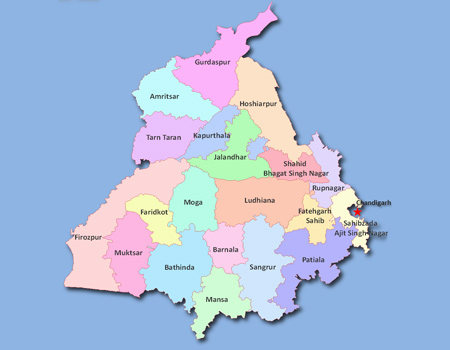 Ancient Punjab formed part of the vast Indo-Iranian region. In later years it saw the rise and fall of the Mauryas, Bactrians, Greeks, Sakas, Kushans and Guptas. Medieval Punjab saw a supremacy of the Muslims. Ghaznavi was followed by the Ghoris, the Slaves, the Khiljis, the Tughlaks, the Lodhis and the Mughals. Fifteenth and sixteenth centuries marked a period of watershed in the history of Punjab. Through teachings of Guru Nanak, Bhakti movement received a great impetus. Sikhism began as a socio-religious movement, which was more interested in fighting evils in religion and society. It was Guru Gobind Singh, the tenth Guru, who transformed the Sikhs into the Khalsa. They rose to challenge tyranny and after centuries of servitude, established a humane Punjabi Raj based on secularism and patriotism. Maharaja Ranjit Singh, in the words of a Persian writer, changed Punjab from Madam Kada to Bagh-Bahist (from the abode of sorrow to the garden of paradise). But soon after his death the entire edifice collapsed due to internal intrigues and British machinations. After two abortive Anglo-Sikh wars/Punjab was finally annexed to the British Empire in 1849. The fight against the British rule had begun long before Mahatma Gandhi's arrival on the scene. The revolt found expression through the movement of a revivalist or reformist character. First, it was the Namdhari sect, which believed in self-discipline and self-rule. Later, it was Lala Lajpat Rai who played a leading role in the Freedom Movement. Punjab was in the vanguard of India's freedom struggle on all fronts in India and abroad. Punjab's hardships did not end with Independence. It had to face the misery of partition with large-scale bloodshed and migration. Besides their rehabilitation, there was the task of reorganisation of the State.

Eight princely States of East Punjab were grouped together to form a single state called PEPSU—Patiala and the East Punjab States Union—with Patiala as its capital. PEPSU State was merged with Punjab in 1956. Later in 1966, Haryana was carved out of Punjab and during the same year the erstwhile capital of Punjab was shifted from Shimla to Chandigarh.

Situated in the north-western corner of the country, Punjab is bounded on the west by Pakistan, on the north by Jammu and Kashmir, on the north-east by Himachal Pradesh and on the south by Haryana and Rajasthan. There are 13 Members of Parliament from Punjab and 117 Members of Legislature are elected to form the State Government.

Punjab has accorded top priority to the development of Agriculture sector and has achieved about 3% growth in the first four years of the 11th Plan. Sustenance of cereal production and productivity is not only important for the State but also for the food security of the nation. The state has been consistently contributing about 45% of wheat and 25% of rice towards the central pool thereby ensuring the national food security. In the year 2010-11, the State produced 162 lakh MT paddy, out of which 129 lakh MT has been procured. Similarly, the State produced 152 lakh MT of wheat, out of which 108 lac MT has been procured. Only 10 districts of the State are covered under National Food Security Mission for wheat and no district of the State has been included under National Food Security Mission for rice even though state is its leading producer.

The State has 83% of its total geographical area (50.36 lakh hectare) under cultivation. The cropping intensity is around 189.69% with over 97% of the cultivable area being under assured irrigation. The State produces 19.50% of the country's wheat, 11% rice, 10.26% cotton and contributes significantly to the Central Pool with about 50% wheat and 40% rice. The paddy and wheat productivity in the State is 4022 kg/ha and 4462 kg/ha against the national average of 2178 kg/ha and 2907 kg/ha respectively Fertilizer consumption at 223.46 kg/ha. The State's farm economy is highly mechanized.

In its earnest endeavor towards rural transformation and rejuvenation, in State, government has adopted a two pronged strategy, empowerment of the Panchayati Raj Institutions through greater functional and financial autonomy and all round improvement of the rural habitats through the provision of basic amenities. Outlay for rural development has been increased by 148% i.e. from ? 209 crore in 2010-11 or ? 516 crore for 2011-12.

New Industrial Policy, 2009 of Punjab has been implemented, under which special package of concessions has been provided for Information Technology of knowledge based industries, agro based industries and food processing industries. In order to promote the IT units, new schemes relating to reimbursement of stamp duty provision of capital subsidies etc. have been included in the Annual Plan 2011-12 with an outlay of ? 19 crore.

The total geographic area of the State is 50.36 lakh hectare, out of which about 41.74 lakh hectare area is under cultivation. After partition of the country in 1947, Indus Water Treaty of 1960 between India and Pakistan restricted India's right to usage to only three eastern rivers Satluj, Beas and Ravi. The State has three dams namely Bhakra Dam with storage capacity of 5.60 MAF constructed on River Satluj, Pong Dam with storage capacity of 1.90 MAF and Ranjit Sagar Dam constructed on River Ravi. At present the area under irrigation is 40.77 lakh hectares, which is 97.68% of the area under cultivation. The canal surface water distribution system consists of 14500 km of Canals/Distributaries covering six major systems in the State namely; Sirhind Canal system, Bhakra Main Line, Bist Doab Canal, Upper Bari Doab Canal, Sirhind Feeder and Eastern canal. Contrary to common perception only 27% of area is irrigated by canal surface water and the remaining 73% is irrigated by tubewells in Punjab. This has resulted in depletion of ground water table. As many as 112 out of 141 blocks have been categorized as over exploited or "dark blocks". The canal water and electricity are being provided free of cost to the farmers in the State.

The present generation capacity of Punjab is 6900 MW including central share of 1940 MW, where as peak unrestricted demand is about 10435 MW. Thus there is shortfall of 34% of peak demand. The power demand is likely to go up to 11000 MW by the end of the 11th Five Year Plan.

Punjab Energy Development Agency (PEDA) has implemented a special programme of 2HP Solar Photovoltaic. Water Sets for irrigation purposes in the state with financial assistance of Rs 41.45 crore from the Ministry of Non-Conventional Energy Sources, Government of India. So far 1,700 of such solar water pumps sets have been installed in the state share FY 2000-01. Another 700 of solar pumps sets are under execution. PEDA has also taken up the execution of eight Mini Hydel Projects with a total capacity 9.8 MW on canal falls as technology demonstration projects. Another 44 Micro Hydel Projects with a total capacity of 36 MW have been allocated to private sector on BOO basis.

PEDA has also commissioned 200 kwp Solar Photovoltaic Grid Interactive Power Plant at village Khatkar Kalan, Distt. Nawanshahar at a total cost of Rs 4.5 crore with 67 per cent grant from MNES Govt. of India. This project has been dedicated to the nation on 23 March 2003 by Dr. A.P.J. Abdul Kalam, Honourable President of India. PEDA has also been sanctioned 1 MW Biomethanation cattle dung based demonstration power project at Haebowal Dairy Complex (Ludhiana). The cost of this project is Rs 14 crore (approximately). MNEX has provided 50 per cent grant for this project. This project was commissioned on 3 November 2004. The work of Sardar Swaran Singh National Institute of Renewable Energy on Jalandhar-Kapurthala Road with grant of Rs 38 crore from MNES, is also under execution.

Roads: Public Works Department (Building and Roads) in the State has been responsible for construction of roads, bridges and buildings. The State has big net¬work of 70528 km of roads comprising of 1749 km of national highways, 1462 km State highways, 2112 km major district roads, 4482 km of other district roads, 51059 km of rural link roads, 8130 km urban roads and 1534 km project roads.

The State Transport has a fleet of 6606 Buses consisting of Punjab Roadways (1568), PRTC (1089) and Private Operators (3949) covering 16,44,647 km in the State and 155034 km in other states per day providing services to the cities as well as rural areas and adjoining States-Haryana, Himachal Pradesh Rajasthan, J&K, Uttar Pradesh, Uttarakhand and Union Territories of Chandigarh and Delhi.
Railways: The length of the rail routes passing through the State is around 3,726.06 km. Rail communication with Pakistan also emanates from Punjab (Amritsar).
Civil Aviation: The Department of Civil Aviation was set up in Punjab in the year 1962 with a view to make people of the State conversant with aviation and flying.

There are four Flying Clubs at Ludhiana, Patiala, Amritsar and Jalandhar. There is a domestic Airport at Chandigarh and Pathankot. An International Airport at Rajajasansi (Amritsar) and two Aerodromes at Patiala and Ludhiana (Sahnewal). Two Flying Clubs are coming up at Faridkot and Talwandi Sabo. To set up a green field International Airport near rVlacchiwara in Ludhiana at an estimated cost of Rs.17,500 crore on PPP mode, MoU has already been signed between Bengal Aerotropolis Projects Ltd. (BAPL) and PSIDC.

Besides festivals of Dussehra, Diwali, Holi other important festivals/fairs/melas are Maghi Mela at Mukatsar in January, Rural Sports at Kila Raipur in February, Basant at Patiala in February, Holla Mohalla at Anandpur Sahib in March, Baisakhi at Talwandi Saboo in April, Urs at Rauza Sharif at Sirhind in August, Chappar Mela at Chappar in September, Skeikh Farid Agam Purb at Faridkot in September, Ram Tirath at Village Ram Tirath in November, Shaheedi Jor Mela at Sirhind in December, Harballah Sangeet Sammelan Baba Sodal at Jalandhar in December. In addition to above Fairs and Festivals three heritage festivals at Amritsar, Patiala and Kapurthala are also celebrated every year and are very popular among the tourists.