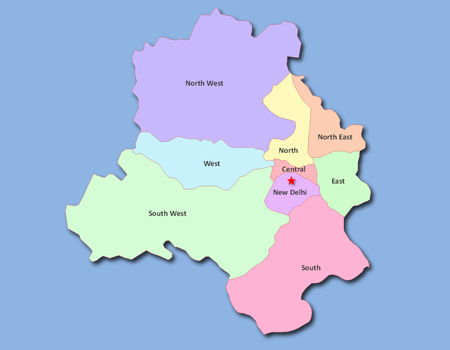 Delhi finds prominent reference right from the times of the epic Mahabharata. Its control passed from one ruler/ dynasty to another, beginning with the Maury as, Pallavas, Guptas of Central India and then going on to the Turks of Afghan during the 13th to 15th centuries, and finally to the Mughals in the 16th century. In the latter half of the 18th century and early 19th century, British rule was established in Delhi.

In 1911, Delhi became the centre of all activities after the capital was shifted from Kolkata (Calcutta). It was made a Union Territory in 1956. Lying in the northern part of the country, Delhi is surrounded by Haryana on all sides except the east where it borders with Uttar Pradesh. The 69th Constitutional amendment is a milestone in Delhi's history as it got a Legislative Assembly with the enactment of the National Capital Territory Act, 1991.

The principal food crops are wheat, bajra, jowar, gram and maize. However, emphasis has now shifted from food crops to vegetables and fruit crops, dairy and poultry farming, floriculture, etc., as these are more remunerative than food crops in the territory.

Delhi's new millennium industrial policy emphasizes setting up of high-tech and sophisticated industries in electronics, telecommunications, software industries, IT enabling services, etc. The industries, which are non-polluting and encourage high value addition and depend largely on skilled manpower are being promoted. DSIDC is setting up a Training Institute for Gems and Jewellery and Assaying and Hallmarking Centre at Okhla in the building of Hitech Vocational Centre.

For the purpose of relocating industrial units functioning in residential non-conforming areas, the Government of NCT of Delhi took possession of 1900 acres of land at village Bawana, Holambi Kalan and Holambi Khurd for developing new industrial estates. Bawana Industrial area developed by DSIDC is the largest in Asia and is spread over 1900 acres of land. At Narela 900 plots have been developed and allotted and another 600 plots are being developed. Work of construction of 378 flatted factories at Jhilmil Industrial Area for relocation of smaller units has been completed. 450 acres of land have been taken for development at the Bhorgaarh industrial estates. In addition to the above, 652 hectare of land is being acquired for development into a huge industrial area in Kanjhawala/Kerala.

Due to fast urbanisation of the rural areas of Delhi, cultivable command area under irrigation is getting reduced day by day. Two schemes, namely, "Keshopur Effluent Irrigation Scheme Phase-Ill" and "Improvement and Extension of Effluent Irrigation System from Coronation Treatment Plant" are under execution. Irrigation of about 350 hectare with state tube-wells and 1,376 hectare from effluent water is being provided in the rural area of NCT of Delhi. In addition about 4,900 hectare of land is being irrigated from western Yamuna Canal network.

The firm availability of power for Delhi from its own generating units at Rajghat Power Houses, IP Station and Gas Turbines including Badarpur Thermal Station is of the order of 850-900 MW. The remaining power is drawn from Northern Regional Grid. Delhi has also envisaged a number of generating projects to be taken up. Pragati Combined Cycle Power Project has been established at Indraprastha Estate. A 330 MW Pragati Power Project under construction is scheduled to be commissioned soon. The test run for its first phase of 100 MW has already started. The work of newly planned 330 MW gas based power plant under Pragati-II and 1000 MW power plant planned at Bawana is going on. Existing coal-based Indraprastha plant is being replaced by 1000 MW gas based plant.

To streamline the distribution of power, DVB has been privatised and Delhi is now served by two of the best electric utilities in India, BSES and Tata Power (NDPL).

Keeping in view the rising vehicular pollution and chaotic traffic condition in the city of Delhi, it has been decided to start Mass Rapid Transit System (MRTS) in Delhi. The Project is under implementation and it uses the state-of-the-art modern technology. The metro rail project runs in Delhi. Now Delhi Metro comprises six lines with a total length of around 190 Km.