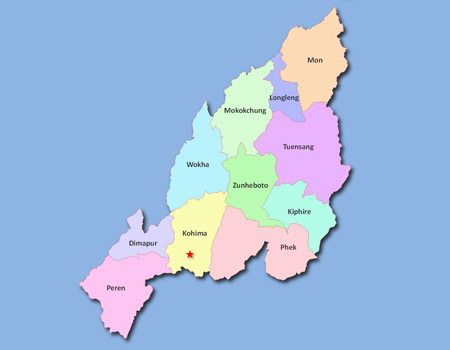 Nagaland, the 16th State of the Indian Union, was established on 1 December 1963. It is bound by Myanmar on the east, Arunachal on the north, Assam on the west and Manipur on the South. It lies between the parallels of 98 degree and 96 degree East Longitude and 26.6 degree and 27.4 degree latitude North of the Equator.

The State of Nagaland has an area of 16,579 sq km with a population of 19,88,636 as per the 2001 census. The State is mostly mountainous except those areas bordering Assam valley. Mount Saramati is the highest peak in Nagaland with a height of 3,840 meters and its range forms a natural barrier between Nagaland and Myanmar.

The Nagas belong to the Indo-Mongoloid group of people living in the contiguous areas of the North Eastern hills of India and the upper portion of Western Myanmar. The major-recognised tribes of Nagaland are Angami, Ao, Chakhesang, Chang, Khiamniungan, Kuki, Konyak, Lotha, Phom, Pochury, Rengma, Sangtam, Sumi, Yimchungru and Zeliang. The Naga languages differ from tribe to tribe and sometimes even from one village to another. They are, however, under the Tibeto-Burma family.

In the 12th and 13th centuries, gradual contacts with the Ahoms of present -day Assam was established but this did not have any significant impact on the traditional Naga way of life. However, in the 19th Century the British appeared on the scene and ultimately the area was brought under British Administration. After Independence this territory was made a centrally administered area in 1957 administered by the Governor of Assam. It was known as the Naga Hills Tuensang Area. This failed to quell popular aspirations, and unrest began. Hence, in 1961, the area was renamed as Nagaland and given the status of State of the Indian Union, which was formally inaugurated on 1 December 1963.

The major land use pattern is slash and burn cultivation locally known as Jhum. Total cultivable areas is 7,21,924 hectare. Area under Jhum cultivation and terraced cultivation is about 1,01,400 hectare.

Out of the total land area, forest area occupies approximately 8,62,930 ha. There are wild life sanctuaries and national parks, namely, Intanki and Puliebadze in Kohima District, Fakim in Tuensang and Rangapahar in Dimapur.

The State's installed generation capacity is 27.84 MW only from Small Hydro Electric Power Projects against the State's requirement of 95 MW. The State's main source of power is from the Central Sector Power allocation. The total number of consumers is 1,70,000 (approximately) 90% of which is domestic.

The projected demand by the end of the 11 Plan for industrialisation, economic development and growth in the State is 200 MW from the existing level of 95 MW. Further, by the end of 12 Plan and 2020 the Department is forecasting load growth of 300 MW and 500 MW respectively. The need to focus on the exploration and harnessing different sources of energy in the State is of utmost importance. The State has therefore identified to take up various Small Potential Hydro Projects.

The State has so far been constructing minor irrigations to divert small hill streams to the valleys and terraced fields for rice cultivation covering an area of 82,150 hectare. Under the NEC Programme the State is implementing Themezee M.I. Project at Chiechama Village under Kohima District. The State has also proposed Dziidza Medium Irrigation Project which is under consideration by the Ministry of Water Resources (Gol) for funding under AIBP Scheme.

The State of Nagaland is connected to the rest of the country with Airport and Railway stations at Dimapur and National Highway 19 which passes through the State from Dimapur via Kohima to Manipur. This NH 39 is soon to be an international route under the Look East Policy of the Government of India. The rest of the State of Nagaland is connected only with roads covering about 23,466 km, these include the NH 61 and State highways. The State is also inter-connected with postal services in all district Hqrs, Telephone line and mobile services.

Music and dances are an intrinsic part of Naga life. Folk songs and ballads eulogising bravery, beauty, love, generosity, etc., are transmitted from generation to generation. Likewise, dancing is an integral part of every festive occasion. Feasting, singing, dancing and merrymaking invariably accompany festivals. Some of the important festivals are Sekrenyi, Moatsu, Tokhu Emong and Tuluni.

The process of industrialisation in the State is in its infancy, but the need to have more industries has been well recognized. Nagaland Mechanised Bricks Co. Ltd., in Dimapur with one lakh capacity of bricks per day has been commissioned. Handloom and Handicrafts are important cottage industries, which are mainly being managed by cooperative societies. The Nagaland Handloom and Handicrafts Development Corporation Ltd. in Dimapur is the state owned corporation, which is responsible for the promotion and marketing of handloom and handicraft products in the state. An industrial growth centre at Ganeshnagar near Dimapur is ready for operation.

With the opening of the State is to international tourist by relaxation of Restricted Area Permit (RAP), a good number of foreign tourists as well as domestic tourists visit Nagaland every year.

The HORNBILL, Festival conceived by the Tourist Department and held in the first week of December is an annual event where all tribes of Nagaland come together to celebrate, exhibit and sell their traditional wares, foodstuffs and crafts. Three traditional festivals, namely Sekrenyi at Touphema in Kohima District (February), Monyu all at Pongo in Longleng Sub-division (April) and Moatsii at Chuchuyimlang in Mokokchung district (May) have been identified as festival destinations.Music and dances are an intrinsic part of Naga life. Folk Songs and ballads eulogizing bravery, beauty, love, generosity, etc. are transmitted from generation to generation. Likewise dancing is an important part of every festive occasion. Feasting, singing, dancing and merrymaking invariably accompany festivals. Names of the tribes and their festivals are : -Angami-Sekrenyi, Ao-Moatsii, Chakhesang-Sukhrunye & Tsiiukhenye, Chang-Naknyulem, Khiamnilungan-Tsokiim, Kuki-Mimkut, Konyak-Aoleang Monyu, Kachari-Bushu, Lotha-Tokhu Emong, Phom-Monyu, Pochury Yemshe, Rengma-Ngada, Sumi-Tuluni, Sangiam-Amongmong, Yimchungriiu-Metemneo, and Zeliang Meileingi/Hega Langsimngi/ Chegagadi.