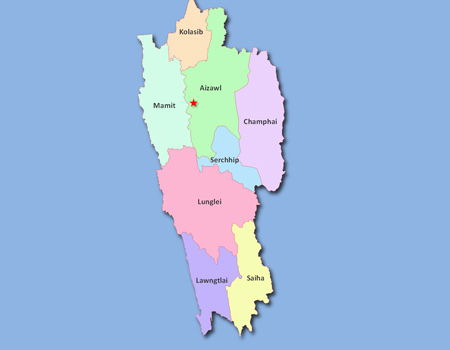 Mizoram is a mountainous region which became the 23rd State of the Indian Union in February 1987. It was one of the districts of Assam till 1972 when it became a Union Territory. After being annexed by the British in 1891, for the first few years, Lushai Hills in the north remained under Assam while the southern half remained under Bengal. Both these parts were amalgamated in 1898 into one district called Lushai Hills District under the Chief Commissioner of Assam. With the implementation of the North-Eastern Reorganisation Act in 1972, Mizoram became a Union Territory and as a sequel to the signing of the historic memorandum of settlement between the Government of India and the Mizo National Front in 1986, it was granted Statehood on 20 February 1987. Sandwiched between Myanmar in the east and the south and Bangladesh in the west, Mizoram occupies an area of great strategic importance in the north-eastern corner of India. Mizoram has great natural beauty and an endless variety of landscape. It is rich in fauna and flora.

The origin of the word 'Mizo' is not known. The Mizos came under the influence of the British Missionaries in the 19 century. Now most of the Mizos are Christians. Mizo language has no script of its own. The missionaries introduced the Roman script for the Mizo language and formal education. Literacy in the State has grown rapidly, and Mizoram's literacy at 91.58% is the third most literate in the country. Serchhip District (98.76%) and Aizawl District (98.50%) recorded the highest literacy rates among districts in the country. The State also holds the highest child sex ratio with 971 females against 1000 males according to the 2011 Census.

About 60 per cent of the people of Mizoram are engaged in agricultural and its allied activities. The main pattern of agriculture followed is Jhum or Shifting cultivation. Of the total 21% is put on the paddy/seasonal crops. About 63% of the total crop area is under Jhum cultivation. To replace the destructive and unproductive Jhum cultivation with sustainable means of occupation, the State Government has launched an innovative programme called the New Land Use Policy cover all the districts of Mizoram. An integrated Land Use Planning, aimed at preservation of rain forests, creation of community reserve forests, supply reserves, earmarking of cultivation areas under New Land Use Policy, habitation and infrastructure developments will be adopted.

6.30 lakhs hectare of land, out of the estimated total of 21 lakhs hectare, is available for cultivation of horticulture crops. The main horticulture crops are Mandarin Orange, Banana, Passion Fruit, Grapes, Hatkora, Pineapple, Papaya etc., and flowers like Anthurium, Bird of Paradise, Orchid, Chrysanthemum, Rose and other subsidiary seasonal flowers. Spices like Ginger, Turmeric, Black Pepper and Bird's eye Chillies are also grown. A Multi-purpose Packing House has been set up at the Horticulture Centre, Chite in collaboration with M/s Argos (Agri Projects) Ltd., Israel.

91.27% of the total geographical area (21,081 sq kms) is covered with forest which is the highest in the country. Out of this, 0.64% is very dense forest while a very substantial portion i.e. 69% is open forest. The hugely popular and effective Green Mizoram Programme has been continued to its refined form, giving more stress to the survival of the trees planted. 4700 hectares of plantation have been created under the National Afforestation Programme. Recognizing the State's contribution in afforestation and wasteland development, the Ministry of Environment and Forests awarded the prestigious Indira Priyadarshini Vriksha Mitra (IPVM) Awards 2010 to Mizoram. the Aizawl Zoo has made premier record on the first ever successful captive breeding of the highly endangered and rare bird locally called Vavu or the Hame's Bartailed Pheasant.

Due to its topographical and geographical disadvantage coupled with underdeveloped infrastructure and transport bottleneck, growth in industry is very modes. However with the opening up of border trade with Myanmar and Bangladesh, the Look East Policy' of the Government of India and with the peaceful condition of the state, industrialization will substantially gain momentum in the near future.

Small industries dominate the industrial scenario acquiring prominent place in the socio-economic development of the state. The total number of small scale units registered upto 2009-10 was 7,888. With the objective of promoting industries in rural areas, the State Government is presently running two numbers of common facility centres and one RIDC with an intake capacity of 35 trainers. Infrastructural development like Industrial Growth Centre (IGC) at Luangmual, Aizawl, Export Promotion Industrial Park (EPIP) at Lengte, Integrated Infrastructural Development Centre (IIDC) at Pukpui, Lunglei and Food Park at Chhingchhip are nearing completion, apart from upgradation of the existing industrial estates.

Scientific cultivation of tea has also been taken up. Establishment of Apparel Training and Design Centre, Gems cutting and polishing are in the pipeline to encourage setting up of Export Oriented Units (EOUs). Of the cottage industries, Handloom and Handicrafts are given high priority and the two sectors are flourishing to meet consumers' demand in the state and in the neighbouring states of Meghalaya, Nagaland, etc.

The State's power demand is presently worked out to be 107 MW, the bulk of its power requirement is met from Central Sector Generating Stations in which the share of Mizoram is 65.31 MW. However, real time available power is normally 40 MW due to reduction of generation from Central Generating Station, Transmission Failure etc. The State's installed generation capacity as on January 2011 is 29.05 MW Hydel, 22.92 MW Bairabi Thermal Plant and 0.5 MW Diesel Generating Set, Lengpui. Due to high generation cost, Bairabi Thermal Plant and DG Set at Lengpui are used only for emergency purposes. Total number of electric consumers as on 31 March 2010 is 153999 and number of electrified villages as on January 2011 is 603 out of 707 villages. Balance 104 villages are being electrified under RGGVY Scheme.

Road serves as the most important means of communication, transportation of goods and passengers within the state, inter state and with international borders. Total road length in the state is 6349.60 kms and road density is 300012km/100 sq km. approximately. There are 6 National Highways passing through the length and breadth of Mizoram. NH-54 connects Aizawl with the rest of the country through Silchar. Aizawl is also accessible by road from Shillong and Guwahati.

Rail link in the state has been established at Bairabi, near the Assam border measuring 1.5 km from Katakal junction. The Airport at Lengpuri is connected by flights to and from Kolkatta, Imphal and Guwahati.

Mizos are basically agriculture oriented. All their activities centre around jhum cultivation and their festivals are linked with such agricultural operations. "Kut" is the Mizo term for festival. Among the various cultural festivals, only three, viz. ChapcharKut, Mim Kut and Thalfavang Kut are observed today.

Music and dance is a vital part of Mizo society. Often called as, "Song bird of the East" the Mizos are blessed with a precious God given talent in music. Festivals are celebrated with vibratnt music, songs and beautiful energetic dances. Among the different folk dances, Cheraw, performed with bamboo is by far the most beautiful and well-known dance. In fact, Mizos set a new Gunnies World Record of the largest bamboo dance ensemble where 10,736 young men and women performed the Cheraw dance on 12 March, 2010.

Aizawl, located at nearly 4,000 ft. above sea level, is a religious and cultural centre of Mizoram. Champhai is a beautiful resort on the Myanmar border. Tarn Dil, a natural lake with virgin forests, is 80 km from Aizawl and 10 km from Tourist Resort

of Saitual. Vantawng Falls, 5 km from the town of Thenzawl, is the highest and most beautiful waterfall in Mizoram. Phawngpuri is the highest peak of the state. The department of Tourism has opened Tourist Lodges in all the bigger towns all over the state, and Highway Restaurants and Travellers' Inns in other townships. There is also a Recreational Centre at Beraw Tiling, Aizawl and Alpine Picnic Hut at District Park near Zobawk. Reiek Tlang, where the Tourism Department created a typical Mizo Village, modern Mizo village, resort and cafeteria is another tourist attraction where Anthurium Festival is held every year.