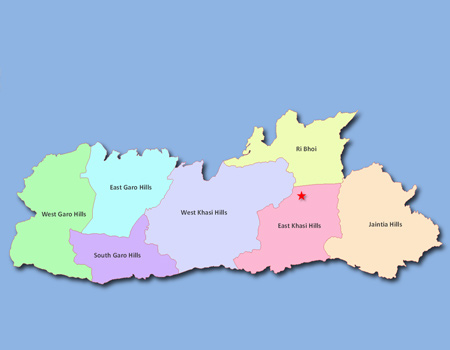 Meghalaya was created as an autonomous State within the State of Assam on 2 April 1970. The full-fledged State of Meghalaya came into existence on 21 January 1972. It is bounded on the north and east by Assam and on the south and west by Bangladesh. Meghalaya literally means 'the Abode of Clouds' and is essentially a hilly State. It is predominately inhabited by the Khasis, the Jaintias and the Garos tribe communities. The Khasi Hills and Jaintia Hills which form the central and eastern part of Meghalaya form an imposing plateau with rolling grassland, hills and river valleys. The southern face of the plateau is marked by deep gorges and abrupt slopes, at the foot of which, a narrow strip of plain land runs along the international border with Bangladesh.

Meghalaya is basically an agricultural State in which about 81 per cent of its population depends primarily on agriculture for their livelihood. The State has a vast potential for development of horticulture due to the agro-climatic variations, which offer much scope for cultivation of temperate, sub-tropical and tropical fruits and vegetables.

The Meghalaya Industrial Development Corporation Limited, as the Industrial and Financial Institution of the State, has been rendering financial assistance to the local entrepreneurs. District Industries Centres have been working in the field for the promotion and development of small-scale, village, tiny and cottage industries. A number of industrial projects have been set up for the manufacture of iron and steel materials, cement and other industrial products.

A five-day-long religious festival of the Khasis 'Ka Pomblang Nongkrem' popularly known as 'Nongkrem dance' is annually held at Smit village, 11 km from Shillong. 'Shad Suk Mynsiem', another important festival of the Khasis is held at Shillong during the second week of April. 'Behdeinkhlam', the most important and colourful festival of the Jaintias is celebrated annually at Jowai in Jaintia Hills in July.'Wangala festival' is observed for a week to honour Saljong (Sungod) of the Garos during October - November.

Roads: Six national highways pass through Meghalaya for a distance of 606 kilometer.
Aviation: The only airport in the State at Umroi, is 35 km from Shillong.

Meghalaya is dotted with a number of lovely tourist spots, where nature unveils herself in all her glory. Shillong, the capital city, has a number of beautiful spots. They are Ward's Lake, Lady Hydari Park, Bishop Beadon Falls, Elephant Falls, Umiam Lake, Mini Zoo and Shillong Peak overlooking the city and the Shillong Golf Course, which is one of the best in the country.