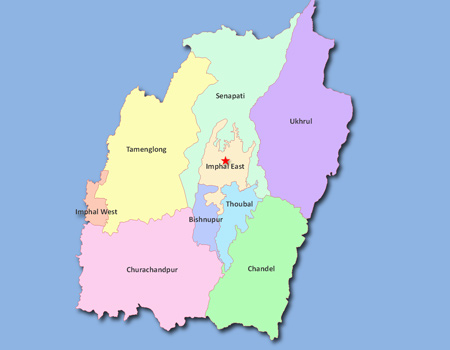 Manipur has a long and glorious history from before the beginning of the Christian era. The political history of Manipur could be traced back to 33 A.D. with the coronation of Nongda Lairen Pakhangba. After Pakhangba a number of kings ruled over the kingdom of Manipur. The independence and sovereignty of Manipur remained uninterrupted until the Burmese invasion and occupation for around seven years in the first quarter of the 19th century (1819-1826). Then, Manipur came under British Rule on 27 April 1891. Manipur regained its independence in 1947 and merged into Indian Union on 15th October 1950. Thus, it became a Part C State under a purview of Chief Commissioner. During 1950-51, an Advisory form of Government was introduced and in 1957 this was replaced by a Territorial Council of 30 elected and 2 nominated members. Later, in 1963 a Territorial Assembly of 30 elected and 3 nominated members was set up under the Government of Union Territories Act, 1963. The status of administrator was raised from that of a Chief Commissioner to that of a Lt. Governor in December 1969. Manipur became a full-fledged State on 21st January 1972 with a Legislative Assembly of 60 members of whom 19 are reserved for Scheduled Tribes and one for Scheduled Castes. The State is represented in the Lok Sabha by two members and by one member in the Rajya Sabha.

Manipur is situated in the extreme north-eastern border of India. It is bounded on the east by upper Myanmar, on the north by Nagaland, on the west by Cochar District of Assam and on the south by Chin Hills of Myanmar and Mizoram. Manipur has a total border line of about 854 kms. of which about 352 kms. are international boundary line with Myanmar on the east and south-east. This State is a geographically unique position, since it virtually is the meeting point between India and South-East Asia. Manipur lies between 23.80° N and 25.68° N latitude and between 93.03° E and 94.78° E longitude.

The State has a total area of 22,327 sq. kms. There is a small oval shaped plain in the central part. This central plain known as Imphal Valley is at a height of about 790 metres above MSL. This valley is surrounded by hills on all sides. The hill covers about 9/10 of the total area of the State. The hill ranges are higher on the north and gradually diminish in height towards the south. The valley itself slopes down towards the south.

Agriculture and allied activities are the only mainstay of the State's economy where about 70 per cent of the population depends on it. The State has two topographical zones — valley and hills. The valley is known as the 'Rice Bowl' of the State. The valley has sub-tropical to tropical to sub-temperate climate. The hills have sub-temperate to temperate climate with an average altitude of 3000 metres above MSL. The State has distinct winter, warm, humid and rainy summer. The average rainfall during the last 10 years is 1482.20mm. with heavy precipitation during the month of June, July and August. The growth of agriculture in the State has been quite uneven for the reason that its production still depends on seasonal rainfall.

During the 12th Five Years Plan and Annual Plan 2012-13 thrusts is given to get self-security in food grains, oilseeds, sugarcane and potato. The Strategy for agricultural development during 12th Plan over the anticipated achievement of 2011 -12.

According to the State Forest Report, 2009 prepared by Forest Survey of India, Dehradun, the forest cover in the State (based on interpretation of satellite data of December 2006 to January 2007) is 17,280 sq.kms, which is 77.40% of the State's geographical area. In terms of forest canopy density classes, the State has 701 sq. kms. of very dense forests, 5474 sq. kms. moderately dense forests and 11,105 sq. kms. open forests. Comparison of the current forest cover with the previous assessment in 2005 shows an overall increase in forest cover of 328 sq. kms. This overall increase in forest cover is mainly due to regeneration in abandoned jhum areas.

The Handloom industry is by far the largest and most important cottage industry in Manipur. It improves the socio-economic conditions of handloom weavers and attained high degree of excellence. It continues to be so even in this a " modern sophisticated machineries. As per the 3rd National Handloom Census * Weavers and Allied Workers 2010 conducted by the National Council of Applied Economic Research (NCAER), Manipur has topped in distribution of handloom workers households sharing, i.e. 33.7% to total household of the State. There are 218,753 handloom workers (200,607 weavers, 18,146 workers) which is 4th position among the top States of the country, 1,90,634 looms which is 3rd position and consuming 186,703 kg of yarn in 2009-10 which is 3rd in the country. About 91%. of the total handloom workers are independent weavers outside the Co-operative/Master Weavers/Corporation/KVIC/Private Owners. Manipur is, therefore, among the top four States of the country promoting and nurturing the handloom industry for generating employment to a large section of the State's population. With this potential, the State Government has been implementing various welfare as well as developmental handloom schemes for promotion and development of handloom industry as employment generating programme in the State.

Power Supply in Manipur is fully dependent on the Central Generating Stations situated in the North Eastern Region (NER). As the generating stations in the NER are mainly of hydel in nature, during lean period there is a shortfall in generation and therefore the available share of Manipur reduces drastically.

The State Government continues to exert all its efforts as a facilitator for industrialisation of the State with due emphasis on the prospective and potential areas. Handloom is the most popular traditional industry providing maximum employment in the State. With the introduction of Border Trade between India and Myanmar in 1995, the Department of Commerce and Industries of the State Government has been acting as a liaisoning agent for promotion and development of Border Trade.

Roads:  Road Transport is the only means of communication for development of the State as there are no inland Waterways, Railways or Ropeways. All development activities depend entirely on the road transport facilities.

The total length of roads in Manipur by the end of 11th Five Year Plan and at the beginning of 12th Five Year Plan (including National Highways, NEC, BRTF & Roads under Rural Development) was 12,618 km.

3 National Highways : i) NH-39, ii) NH-53 and iii) NH-150 criss-cross the State connecting all Districts. Imphal the capital of Manipur is connected by NH-39 with Nagaland on the north and Myanmar on the east, on the west with Assam by NH-53 and Mizoram on the south by NH-150.
Aviation: Imphal Airport is the second largest airport in the North Eastern Region. Imphal is connected to Agartala, Aizwal, Dimapur, Guwahati, Kolkata, Pune, Silchar, Bangaluru and New Delhi by Air India, Jet Airways, Indigo and Kingfisher Airlines.

Imphal Airport is being upgraded to international status. The Construction of infrastructure for Night Landing Facility at Imphal airport has been completed and Night Flights have started.
Railways: The State was included in the railway map of India with the opening of a rail head at Jiribam in May 1990. It is 225 km from Imphal. Dimapur (Nagaland), 215 km from Imphal is the nearest rail-head.
The Jiribam - Tupul - Imphal Railway line has been declared as a National Project. Construction of the Line is in good progress and is targeted for completion by 2014 (upto Tupul) and 2016 (upto Imphal).

A year in Manipur represents a cycle of festivals. Hardly a month passes by without a festival which to the Manipuris is a symbol of their social, cultural and religious aspirations. Important festivals of the State are: Lai Haraoba, Rasa Leela, Cheiraoba,Ningol Chak-Kouba, Rath-Jatra, Idul Fitre, Imoinu Iratpa, Gaan-Ngai, Lui-Ngai-Ni, Idul Zuha. Yaoshang (Holi), Durga Pujah, Mera Houchongba, Diwali, Kut, Christmas, etc.