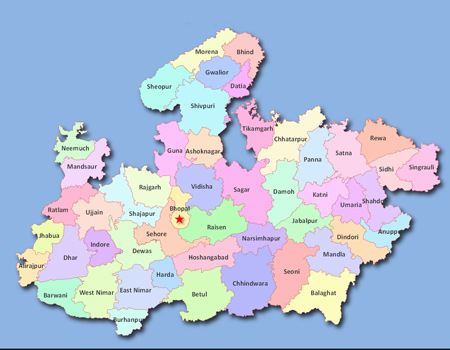 Madhya Pradesh is the second largest Indian State in size with an area of 3,08,000 sq.km. Geographically it occupies a pivotal position in the country.

King Ashoka, first among all, ruled over Ujjain. A sizeable portion of Central India was part of the Gupta empire (300-500 A.D.). The Muslims came into Central India in the beginning of 11th century. First of all, Mohamood of Ghazni came over here and then Mohammad Gouri, who incorporated some parts of Central India into his ruling territory of Delhi. Central India was also part of the Mughal empire. During the period between the beginning of the influence of Marathas and the death of Madhoji Scindia in 1794, Marathas were on the ascendant in Central India but later on the small states started coming into existence. These small states became the cause of perpetuation of British power in the country.

Queen Ahilyabai Holkar of Indore, the Gond Maharani Kamalapati and Queen Durgawati, etc. were women rulers whose names have left an indelible imprint on Indian history for their outstanding rule. Madhya Pradesh came into being on 1 November 1956. It was reorganised on 1 November 2000 to create a new Chhattisgarh state. The successive state, now, is bounded in north by Uttar Pradesh, east by Chhattisgarh, south by Maharashtra and west by Gujarat and Rajasthan.

Madhya Pradesh has entered the era of high-tech industries such as electronics, telecommunications, automobiles, Information Technology, etc. The state produces optical fibre for telecommunication needs. A large number of automobile industries have been established at Pithampur near Indore. Prominent industries in the public sector in the state are Bharat Heavy Electricals Ltd. at Bhopal, Security paper mill at Hoshangabad, Bank Note Press at Dewas, Newsprint factory at Nepanagar and Alkaloid factory at Neemuch and Oman Bina Refinery at Agasod near Bina in Sagar district.

An air cargo complex is coming up at Pithampur. The Government of India has set up a Special Economic Zone at Indore. Foreign Direct Investment is being promoted by implementing the comprehensive Economic Development Policy.

The state government has announced an Industries Promotion Policy offering attractive incentives for investment in the state. The Government of India has also sanctioned a National Auto Testing and Research and Development Infrastructure Project to be set up at Pithampur in Dhar district.

The net area under irrigation was 65.43 lakh hectares in the year 2009-10. Av 1919 crore Water Sector Restructuring Project is being implemented to restore irrigation facility in five lakh hectare by renovating the existing irrigation system in 30 districts.

National Rural Employment Guarantee Scheme has been implemented in all 50 districts. M.P. has topped in the country in its implementation. National Horticulture Mission has been launched to boost horticulture production and productivity in the state.

A number of festivals are celebrated in Madhya Pradesh. An important tribal festival is Bhagoriya marked by traditional gaiety and enthusiasm. Shivratri is celebrated in Khajuraho, Bhojpur, Pachmarhi and Ujjain and has its own local flavour while Ramnavami festival at Chitrakoot and Orchha has a unique sense of devotion imbued with tradition. Festivals of Orchha, Malwa, Pachmarhi bring to the fore, repertoire of culture and art of the people. Tansen Music Festival, Gwalior, Ustad Allauddin Khan Music Festival of Maihar, Kalidas Samaroh, Ujjain and Festival of Dances at Khajuraho are some of the well-known art festivals of Madhya Pradesh. An annual Narmada Festival has been started from this year at Bedhaghat in Jabalpur, famous for its marble rocks. A Shivpuri Festival has been started at Shivpuri. Betwa Festival has been started at Vidisha from this year.

Perfectly preserved medieval cities, refreshing and enchanting wildlife sanctuaries and some of the holiest and most revered pilgrim centres offer to the tourist the most fulfilling experience. Tranquil beauty of Pachmarhi, glittering splendour of Marble Rocks and roaring sound of Dhuandhar Fall at Bedaghat, Kanha National Park, with its unique Barasingha, and Bandhavgarh National Park with its prehistoric caves and wildlife are some of the major attractions of the state. Gwalior, Mandu, Datia, Chanderi, Jabalpur, Orchha, Raisen, Sanchi, Vidisha, Udaygiri, Bhimbetika, Indore and Bhopal are the places well-known for their historical monuments. Maheshwar, Omkareshwar, Ujjain, Chitrakoot and Amarkantak are major centres of pilgrimage. Unique temples of Khajuraho are famous all over the world. The temples of Orchha, Bhojpur and Udaypur attract large number of tourists as well as pilgrims. Archaeological treasures are preserved in the museums at Satna, Sanchi,Vidisha, Gwalior, Indore, Mandsaur, Ujjain, Rajgarh, Bhopal, Jabalpur, Rewa and many other places. Omkareshwar, Maheshwar and Amarkantak have been declared as holy cities for their integrated development in accordance with their religious significance. Burhanpur is being developed as a new tourist destination.