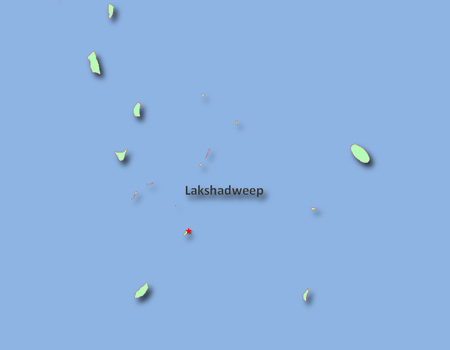 Not much is known of the early history of these Islands. The Islands supposed to have been inhabited first are Amini, Andrott, Kavaratti and Agatti. It was earlier believed that the islanders were originally Hindus and later converted to Islam under the influence of Arab traders sometime in the 14th century. But Archaeological evidences unearthed indicate that there were Buddhist settlements around the 6th or 7th century. Earliest Muslim converts or settlers pre-date the year 139 AH of the Hijra year (eighth century) of which period grave stones have recently been discovered in Agatti. This would tend to bear out the traditional belief that Islam was brought to the Island by Arab Saint, Ubaidulla in 41 AH.

Probably independent till 16th century the Islands were driven to seek the assistance of Raja of Chirakal to help them avert establishment of Portuguese domination. This enabled him to establish his authority and, later, the Islands were transferred in jaggeer to Ali Raja, head of Moplah community in Cannanore, who later became an independent ruler himself. The Arakkal rule was not popular and in 1787, Tipu Sultan acceded to the petitions of the Northern Islands to annex these Islands. After the fall of Tipu Sultan, the Islands were passed to East India Company but continued to be ruled de facto by the rulers of Cannanore till their ultimate annexation by the British in the early 20th century. In 1956, the islands were constituted into a single territory, and since then, have been directly administered by the Union Government through an Administrator. The Laccadives, Minicoy and Amindivi group of islands were renamed as Lakshadweep in 1973. Lakshadweep, a group of coral Islands, consists of 11 inhabited Islands, 16 uninhabited Islands, three reefs and six submerged sand banks. These lie scattered in the Arabian Sea about 280 km off Kerala coast between 8° and 12° 3' North Latitude and 71° and 74° East Longitude.

Coconut is the only major crop with a production of 60 million nuts per year. The area under cultivation is about 2,689 hectare. Lakshadweep coconut is branded as an organic product. In India, Lakshadweep stands first in coconut production and productivity per hectare is 20,600 and average yield per palm per year is 82 coconuts. The Lakshadweep coconuts are the highest oil content nuts in the world (82 per cent).

Fishing is another major activity. The sea around the island is highly productive. The islands stand first in the country in per capita availability of fish.

The Administration operates two helicopters of Pawan Hans Helicopters Limited on Charter for the inter-island service and evacuation of patients from islands to Kavaratti/Agatti and mainland. Besides flight connectivity is mainland by Indian Airlines between Agatti and Kochi except Sundays.

As per the recommendation of 15 years Perspective Plan on shipping requirements in UTL, Govt, of India has approved acquisition of two 400 Passenger Vessels and these vessels are under construction at Colombo Docyard PLC, Sri Lanka and expected for delivery by end of August, 2013 and end of December, 2013. Further, one LPG Carrier Vessel of capacity 2000 Domestic LPG Cylinder and one 150 MT OPil Barge are also under construction at M/s. Shoft Shipyard and M/s. Modest Infrastructure Limited respectively. Moreover, Standing Finance Committee has approved acquisition of 2 Nos. 800 MT Multipurpose Cargo Vessels for UTL Administration and M/s SCI is in the process of finalizing technical tender and inviting financial tenders for these two vessels. Further, a proposal has also been submitted to the Ministry of Shipping for approval for acquisition of one 1000 MT Oil Barge (Bulk Carrier) to overcome the problems in transportation of HSD oil required especially for generation of electricity in the islands.

Tourism is developing into an important industry. Important tourist places are Agatti, Bangaram, Kalpeni, Kadmat, Kavaratti and Minicoy, etc. 6567 Tourist visited the islands in 2011-12 of which 465 are Foreign Tourists.