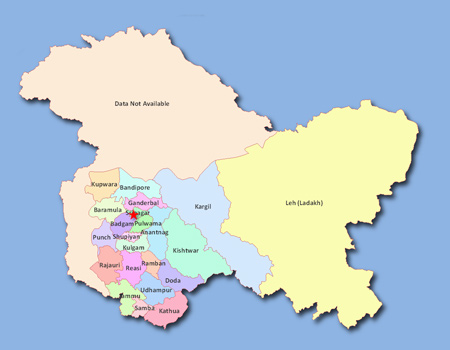 According to the most popular legend that is also recorded in Rajtarangani and Nilmat Fur ana, two most authoritative books, Kashmir was once a large lake and it was Kashyap Rishi who drained off the water, making it a beautiful abode. But geologists have their own theory, which says that geographical changes made way for the outflow of water by subsidence of the mountain at Khadianayar, Baramulla and thus emerged the Valley of Kashmir, the paradise on earth. Ashoka introduced Buddhism to Kashmir in the 3rd century B.C. which was later strengthened by Kanishka. Huns got the control of the valley in the early 6th century. The Valley regained freedom in 530 AD but soon came under the rule of the Ujjain empire. After decline of the Vikramaditya dynasty, the valley had its own rulers. There was a synthesis of Hindu and Buddhist cultures. Lalitaditya (697-738 AD) extended his rule up to Bengal in the east, Konkan in the south, Turkistan in the north-west and Tibet in the north-east. Considered as the most famous Hindu ruler, he was known for constructing beautiful buildings. Islam came to Kashmir during 13th and 14th centuries AD. Zain-ul-Abedin (1420-70) was the most famous Muslim ruler, who came to Kashmir when the Hindu king Sinha Dev fled before the Tatar invasion. Later Chaks overran Haider Shah son of Zain-ul-Abedin. They continued to rule till 1586 when Akbar conquered Kashmir. In 1752, Kashmir passed on from the feeble control of the Mughal emperor of the time/to Ahmed Shah Abdali of Afghanistan. The Valley was ruled by the Pathans for 67 years.

Name of Jammu figures in the Mahabharata. Recent finds of Harappan remains and artefact of Mauryan, Kushan and Gupta periods at Akhnoor have added new dimensions to its ancient character. The land of Jammu was divided into 22 hill principalities. Raja Maldev, one of the Dogra rulers, conquered many territories to consolidate his kingdom. Raja Ranjit Dev ruled over Jammu from 1733 to 1782. His successors were weak and thus Maharaja Ranjit Singh annexed the territory to Punjab. He later handed over Jammu to Raja Gulab Singh, a scion of the old Dogra ruling family, who had grown powerful among Ranjit Singh's governors and had annexed almost the whole Jammu region. The State was governed by Dogra rulers till 1947 when Maharaja Hari Singh signed the Instrument of Accession in favour of the Indian Union on 26 October 1947.

In order to achieve a self sustaining economy with continued higher levels of investment, rapid rate of increase on income and employment there is no option but to go for industrialisation.

To usher in new era of industrialization comprehensive industrial policy came into being in 2004 to be lasted till 2015 under which planned incentives are being taken to raise J&K which is predominantly known as consumer State for most of its requirements to a level of self sufficiency and in the near future to a producer State. The incentives provided in the policy are ahead of other States of the country.

Keeping in view the importance of Handicrafts, Handlooms and other related traditional sectors in the state economy the state Government is going to develop the International Trade Centre (ITC) in order to promote trade facilities and to boost the exports of these export oriented sectors.

It is also as labour intensive cottage industry having considerable potential for generation of employment opportunities. To give boost to this industry the State Govt, ios laying focus on products design and diversification, providing credit facilities, enhancing weavers' productivity through upgradation of sills and use of efficient looms, Market access to handloom products is being extended through marketing incentives and wide publicity. During the 11th Five Year Plan GOI has introduced an Integrated Handloom Development of handloom weavers located in and outside identified handloom cluster into a cohesive, self managing and competitive socio economic units. Under this scheme, 10 handloom clusters, and 17 Group approach Projects have been take up at the project cost of Rs. 712.59 lakh. OUt of central share of Rs. 394.59 lakh Rs. 221.57 lakhs have been utilized by the end of 11/2011. In the cooperative sector during the year 2011-12 (as on Nov 2011) approximately 12.42 million meters of handloom fabrics valuing Rs. 281.85 crore were produced.

Agriculture constitutes an important sector of the state economy as around 70% of the population of J&K derive greater part of their income directly or indirectly from this sector. Economy of J&K continues to be predominantly agrarian as 49% of the total working force with 42% as cultivators and 7% as agriculture labourers depend directly on agriculture for their livelihood. Apart from direct impact of agriculture growth on generation of rural employment and incomes, its significant secondary linkages with development of rural non-farm sectors are more crucial. Trade in agricultural outputs and inputs and services required by it and processing of its products open up additional and more significant avenues for labour absorption. Agriculture in the state besides has a significant contribution in the export of rare agriculture produce like saffron, honey and basmati and remains an important source of raw material demanded by many industries. Looking at the contribution of agriculture and allied sectors to the state economy it has been estimated that 18,46% of GSDP (2011-12) accrue from it. The individual share of agriculture has been estimated in the range of 8-9% for 2011-12 (advance estimates).

Irrigation is an essential input of agriculture and is practised in all parts of the world where rainfall does not provide enough ground moisture. In areas of irregular rainfall, irrigation is used during dry spells to ensure harvests and to increase crop yields. A major constraint to the development of agriculture in J&K is the fact that only 50% of the ultimate irrigation potential of the state has been harnessed. The ultimate irrigation potential in J&K has been assessed at 1358 thousand hectare, which includes 250 thousand hectare to be developed through major and medium irrigation and 1108 thousand hectare through minor irrigation.

The net area sown in the state during 2010-11 was 732 thousand hectares whereas the gross area sown (total area sown under different crops) was 1140 thousand hectares. The mode of irrigating the crops mainly used is the canals. About 92 per cent of the net area irrigated is irrigated through canals, while tanks, tube wells and other means are also used.

Jammu & Kashmir is well known for its horticulture produce both in India and abroad. The state offers good scope for cultivation of all types of horticulture crops covering a variety of temperate fruits like apple, pear, peach, plum, apricot, almonds, cherry and sub-tropical fruits like mango, guava, citrus, litchi etc. Apart from this, well-known spices like saffron and zeera are cultivated in some parts of the state. Horticulture is emerging as a fast growing sector in the state. Its importance is visualised by its contribution to the state's economy which is estimated to be 7-8%. Almost 45% economic returns in agriculture sector is accounted for by horticulture produce. 5 lakh families comprising of 30 lakh people are involved in horticulture trade.

The horticulture department has reported that an estimated area of 3.35 lakh hectares was under horticulture during the year 2011-12 (Nov 2011) showing an increase of 3.04% over the previous year's area figures. In the area figures highest share of 44.10% is claimed by appled followed by 24.85% walnut.

The estimated hydro power potential of the State is 20,000 Megawatts (MWs), of which 16480 MWs have been identified. Out of the identified potential, only, 2457.96 MWs or 15 per cent have been exploited so far, consisting of 758.70 MWs in State Sector from 20 power projects and 1680 MWs from three power projects under Central Sector i.e. 690 MWs (Salal Hydro Electric Project) and 480 MWs (Uri-I Hydro Electric Project) and Dulhasti 390 MWs and 120 MW (Sewa III) and 17.,5 MW from two private sector Projects. The prestige Baglihar Hydro Electricity Project, with a capacity of 450 MWs was commissioned during 2008-09.

The fairs and festivals are a reflection of diverse cultural and social heritage of the state. All Hindu, Muslim of Sikh fairs and festivals are celebrated with full vigour and enthusiasm regardless of the religion. Like all parts of INdia, Jammu & Kashmir also celebrates Diwali (hindu Festival, famous for fireworks, crackers and sweets), Holi (Hindu festival, famous for colours and sweets), EiD (Besides other religious festivals Muslims observe Eid-ul-Fitre and Eid-ul-Azha, Milad-un-Nabi (SAW and Muharam)

Roads: The State is connected to the rest of the country through just one highway (NH1A), 400 km stretch (approx.) maintained by Border Roads Organization (BRO) of India. As Railway network of the State is in infancy stage, this has rendered the State totally dependent on road connectivity which provides links to the remote areas of the State. The Jammu-Srinagar National Highway (NH1 A) is considered to be the most expensive road for maintenance in the world.

Railways: Because of the difficult terrain Railway network has not developed as in other parts of the country. At present Jammu is the Rail head of the State and the line has been extended upto District Udhampur only (53 kms). The work on Udhampur-Qazigund rail line is under progress and intra rail link between Qazigund to Baramulla is complete. However, the railway link of 119 km from Baramulla to Qazigund has been thrown open and 173 km railway line is under construction.
Aviation: There are three major airports in the state providing aerial transport among three regions of the State and the country. Out of the three Srinagar airport has been upgraded as international airport (named as Sheikh-ul-Alam Airport), while the facilities at Jammu and Leh airports are also being upgraded. One more airport at Kargil headquarters is connected by Dakota service.

Jammu & Kashmir is an important Tourist destination and has been a place of attraction for tourist since centuries. The lush green forests, sweet springs, perennial rivers, picturesque alpine scenery and pleasant climate of Kashmir valley— the paradise on earth has remained an internationally acclaimed tourist destination, whereas Jammu region—the land of temples is attracting a large number of pilgrim tourists and the important destination has been the shri Mata Vaishno Devi Shrine. Ladakh region-the moon land has been a much sought-after destination especially for the foreign Tourists and is famous for adventure tourism.