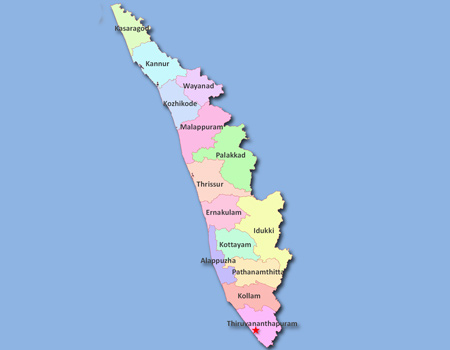 In between the high Western Ghats on the east and the Arabian sea on the west, the width of the state varies from 35 km to 120 km. According to the geographical features, the state can be divided into hills, valleys, midland plains and coastal belt. 44 rivers (41 west flowing and 3 east flowing) cut across Kerala with their innumerable tributaries and branches. The backwaters form an attractive and economically valuable feature of Kerala.

Kerala, India's most emerging Industrial destination beckons with an endless listing of opportunities in varied sectors. To transform Kerala into a vibrant entrepreneurial society with faster, inclusive and sustainable economic growth in order to achieve global standards in every domain. The government have taken steps to implement investor friendly industrial policy to enable constructive investment in all sectors.

It had been a satisfying period for industry and allied sectors in Kerala. While the manufacturing sector for the country as a whole registered a growth rate of 8.2% during 2010-11, in Kerala it recorded a wee bit higher at 8.74 per cent. According to the statistics published by the Department of Economics and statistics, the growth rate for the period from 2005-06 to 2010-11 averaged 7.9 per cent at constant prices and 15.66 per cent at current prices. The contribution of the manufacturing sector to GSDP at constant and current prices during 2010-11, was 8.28 percent and 9% respectively.

During 2010-11, 2300 companies were newly registered which included 52 public limited and 2248 private limited companies. Kerala has not been a major recipient of Central investment, its share being a measly 2.6 per cent. As for Kerala it ranked 17th.

The surface irrigation constitutes major chunk of irrigation infrastructure in the state. There are 18 dams in the state intended for irrigation. Out of this, 14 have storages and remaining are barrages. In the beginning of the Monsoon (in 2011), the total storage was 525 M m3 and at the end of the monsoon are level of the storage was 1274 M m3 against the storage level of 531M m3 at the beginning of the monsoon and 1212M m3 at the end of the monsoon period during the previous year. Irrigation development in Kerala is mainly cnetrered on the development of surface water resources mainly on the development of major and medium irrigation projects. In each plan, priority in allocation was given for the development of major and medium irrigation projects. Out of a cumulative expenditure of Rs.6713.72 crores as on 31.10.2011, Rs. 4725.15 crores (70.38%) is invested for major and medium irrigation. About 60 to 70% of the investment in each plan ws made for this purpose.

Rice is the major crop benefited through irrigation infrastructure. With the fast changes taking place in the farm front of Keala with notable reduction in the area under rice cultivation, even the distribution system already developed for gravity irrigation to service rice cultivation now require realignment.

As per the assessment of the Directorate of Economic and Statistics the net irrigated area in the state as on March 2011, is 3.88 lakh and the gross area irrigated is 4.66 lakh ha.

Demand for water is increasing due to multitude of human activities in the country. The primary responsibility of providing drinking water facilities in te country rests with the respective State Governments. As on 31.03.2011, the coverage of drinking water supply in Kerala was 75.28% of total population. In urban & rural areas of the state, 85.18% and 71.82% of the population were covered. The total number of urban & rural people covered by water supply schemes in Kerala was 70.41 lakh and 169.30 lakh respectively. In 2010-11, the additional population covered was 8,00,861 were in the rural area and 31,010 were in urban area.

Power Sector plays a vital role in all developmental activities in Kerala. Obviously power crisis is the Prime Obstacle to start new initiatives in the industrial field. The need for power is increasing and the production of power should also increase accordingly. Monsoon is essential to sustain the hydro power base in the State and the shortage in rainfall usually creates power crisis. Kerala received abundant monsoon during the current year and it increased the inflow in to KSEB reservoirs; the KSEB could manage the power supply situation with higher quantum of cheaper hydel power. Kerala is one among the very few states in the country where there was no load shading and power cut during 2010-11. KSEB has been responsible for the generation, transmission and distribution of electricity in the State, with particular emphasis to provide electricity at affordable cost to the domestic as well as for agricultural purposes. The Board has been passing through a transitional phase of reforms in the electricity sector. The Electricity Act 2003 envisages separate organizations for Transmission and Distribution.

In the state of Kerala the Public Works Department have a total road length of 33106 Kms of State Roads and 1542 Kms of National Highways. The state roads include 4342 Kms of State Highways and 18900 Kms of Major District Roads. Road improvements, repair and maintenance of existing roads, development and up-gradation are the major activities taken up in the sector during the year.

The Kerala state lies in the south west corner of the Indian peninsula. It has a coastal length of 585 km and the state has an average width of about 60 km with one major port at Cochin and 17 minor ports. The geographical location of Keala is very close to international sipping route. There are 17 minor ports in Kerala, out of which 3 are considered as intermediate ports based on berthing, cargo handling and storage facilities available in them. These have contributed much to the development of industry, trade, commerce and agriculture in the country.

Railways :Railways are essentially the cause for industrial upsurge in the nation and it still remained the largest employment provider for the huge population of the country. The total length of track used by Indian Railways is about 111599 kms. and total route length is 64,215 kms. The toral railway route in Keala has a length of 1257 ms and covers 13 railway route. The Railway Division at Thiruvananthapuram, Palakkad and Madurai jointly carry out Railway operations in Kerala

Air Transport :Kerala has three airports at Thiruvananthapuram, Kochi and Kozhicode handling both International and domestic flights. Thiruvananthapuram and Kozhicode airports are owned by Government of India and Kochi airport is owned by Kochin International Airport Ltd. (CIAL), a company set up by Government of Kerala with public private participation.

Kerala has large deposits of heavy mineral sand in the form of monozite, ilmenite, thorium, rutile, zirconium etc. There are two titanium based industries - the Travancore Titanium Products Ltd and Kerala Minerals and Metals Ltd. The State has large deposits of China clay mainly concentrated in Thiruvanthapuram, Kollam and Kasaragod districts. The deposits of graphite, silica and limestone are considerable in the State. However mineral sand and China clay contribute 90 percent of the total value of mineral production in the State. In 2006-2007 the gem testing laboratory under the Department of Mining and Geology identified 2586 gem stones. Kerala has deposits of Chrysoberil. Granite rocks are abundant in the State and hence there is a flourishing minor quarrying activity under the regulations of the Department of Mining and Geology.

Kerala is the home of many colourful festivals. Onam is the most typical of Kerala festivals which coincides with the harvest season. It is now celebrated on astronomical New Year Day. Navarathri is celebrated as Saraswathi Pooja in Kerala. Maha Shivarathri is celebrated on the banks of Periyar river as a spectacular festival which is compared to Kumbhamela. The 41-day festival, which coincides with Makaravilakku in Sabarimala Ayyappan Temple, attracts lakhs of people from India and abroad. The Vallamkali or boat race is typical of Kerala. All the boat festivals have a religious origin except Nehru Trophy Boat race conducted in the Punnamada Lake. Thrissur celebrates Pooram festival in April - May every year with an impressive procession of caparisoned elephants and display of unparalleled pyrotechnics. Main Christian festivals are Christmas and Easter. Mormon Convention held every year on the Pumba riverbed is the biggest gathering of Christians in Asia. The Muslims celebrate Milade Shareef, Ramzan fasting, Id-ul-Fitr and Bakrid.

Kerala locted on the south western tip of India, enjoys unique geographical features that have made it one of the most southt after tourist destinations in the world. Fondly referred to as 'God's Own Country", Kerala was selected by the National Geographic Traveller as one of the 50 destinations of a lifetime and one of the thirteen paradises in the world. Its unique eco tourism initiatives, culture and traditions coupled with its varied demography has made Kerala one of the most popular tourist destination in the world. An equable climate, serene beaches, tranquil stretches of backwaters; lush hill stations and exotic wildlife are the major attractions of this land. A unique advantage of Kerala is that the most of the destinations here are only a two-four hour drive from the other. Kerala has fascinated people from all over the world with her secularism and culture.