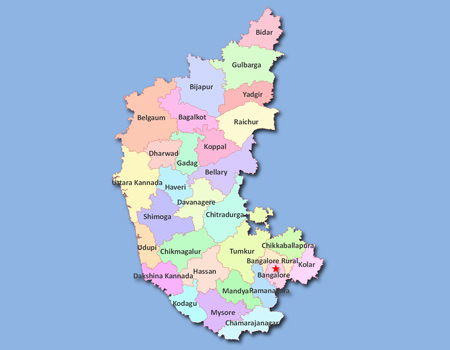 Karnataka has a recorded history of more than 2,000 years. Apart from its subjection to the rule of Nandas, Mauryas and the Satavahanas, Karnataka came to have indigenous dynasties like the Kadambas of Banavasi and the Gangas from the middle of the 4th century AD. The world renowned Gomateshwara monolith at Shravanabelagola was installed by a Ganga minister Chavundaraya. The colossal rock cut image of Sri Gometeshwara in the most magnificent among all Jaina works of art. Numerous visitors arrive at Shravanbelagola to gaze at this and other monuments. The Chalukyas of Badami (500-735 AD) reigned over a wider area, from the Narmada to the Kaveri from the days of Pulikeshi II (609-642 AD) who even defeated the mighty Harshavardhana of Kanauj. This dynasty created fine, everlasting and the most beautiful monuments at Badami, Aihole and Pattadakal, both structural and rock-cut. Aihole has been one of the cradles of temple architecture in the country. The Rashtrakutas (753-973 AD) of Malkhed who succeeded them heaped tributes on the rulers of Kanauj successively in the so-called 'Age of Imperial

Kanauj'. Kannada literature developed during this period. Outstanding Jain scholars of India lived in their court. The Chalukyas of Kalyana (973 to 1189 AD) and their feudatories, the Hoysalas of Halebidu built exquisite temples, encouraged literature and various fine arts. Noted jurist Vijnaneshwara (work: Mitakshara) lived at Kalyana. The great religious leader Basaveshwara was a minister at Kalyana. Vijayanagar empire (1336-1646) patronised and fostered indigenous traditions and encouraged arts, religion and literature in Sanskrit, Kannada, Telugu and Tamil. Overseas trade flourished. The Bahamani Sultans (Capital: Gulbarga, later Bidar) and the Bijapur Adilshahis raised fine Indo-Saracenic buildings and encouraged Urdu and Persian literature. Advent of the Portuguese resulted in the introduction of new crops (Tobacco, Maize, Chillies, Groundnut, potato, etc.). After the fall of the Peshwa (1818) and Tipu (1799), Karnataka came under British rule. Christian missionaries introduced English education and printing during the 19th century. Revolution in transport, communication and industries was ushered in. The urban middle-class emerged. Mysore dynasty initiated and helped industrialisation and cultural growth.

Freedom Movement was followed by the movement for the unification of Karnataka. After Independence, the Mysore State was created in 1953, wherein all the Kannada dominant areas under different dispensations were unified and the enlarged Mysore state carved in 1956 and was renamed Karnataka in 1973.

The Forest department manages about 20.15% of the geographical area of the State. Forests have been classified as reserved forests, protected forests, unclassified forests, villages forests, and private forests. There are 5 National Parks and 23 Wildlife sanctuaries. To overcome shortage of fuel wood, fodder and timber, degraded forests and waste lands are being developed. Emphasis is also being laid on the conservation, protection and development of the fragile ecosystem of the Western Ghats. Several Wildlife protection schemes such as Project Tiger and Project Elephant are being implemented with the Central assistance. The concept of Joint Forest Planning and Management applied to the 2 externally aided projects viz., Western Ghats Forestry & Environment Project (DFID) and Forestry and Environment Project for Eastern Plains (JBIS) has resulted in village forest planning and management through establishment of Village Forest Committees.

The State has 66% Rural population and 55.60 per cent of workers are agricultural labourers. The State has 60% (114 lakh ha) cultivable land and 72% of the cultivable area is rainfed; only 28% is under irrigation. The state has 10 Agro Climatic Zones. The Red soil constitutes major soil type, followed by Black soil. The net sown area of the state constituted 51.7% of the total land.

Karnataka is one of the major milk producers and the Karnataka Milk Federation has 21 dairy processing plants with a capacity of 26.45 lakh liters a day and 42 chilling centres having 14.60 lakh litres of chilling capacity.

Horticulture crops are grown in an area of 16.80 lakhs hectare and the produces amount to 101 lakh ton. The Union Government has earmarked Rs. 171.29 crore for Karnataka under National Horticulture Mission.

Karnataka was the pioneer in establishing hydroelectric projects in the country. Today, Karnataka has 7222.91 Power Generation Installed capacity and 31229 Million Units of Electricity was generated.

Karnataka State continues its unassailable lead in the IT sector, recording software exports of Rs. 48,700 crores, during 2006-07. For 2007-08 upto November-07 the export was Rs. 24450 crores. It is expected to grow by 25% over previous year's achievements. The recent report by Nasscom has recognised Manglore and Mysore among the fastest growing IT cities in the country.

Karnataka State and Bangaluru city in particular have become the largest bio-clusters in the country. The value of Biotech exports was 215 Million US$.

Road: Total road length of Karnataka has increased from 83,749 km in 1971 to 2,15,849 km in 2007. The Karnataka Highways, Improvement Project with World Bank assistance will improve 2375 km of road, i.e. upgradation of 900 km and rehabilitation of 1475 km comprising state highways and major district roads at an estimated cost of ? 2402.51 crore. Assistance is being provided under the Rural Infrastructure Development Fund for the construction and improvement of roads and bridges in the state.

Ports: The Karnataka State has a maritime coastline of 155 nautical mile (300 kilometres) and has only one Major Port at Mangalore, i.e. New Mangalore Port and studded with 10 minor ports of the State-Karwar, Belekeri, Tadri, Honnavar, Bhatkala, Kundapur, Hangarkatta, Malpe, Padubidri and Old Manglore. Out of 10 ports Karwar is the only all weather port while the other nine are the riverine anchorage lighterage ports.

Karnataka "One State Many Worlds" is becoming a Hub of tourist attraction of south India. The IT & BT Centre Bangaluru has received more tourists in the recent past. The State is known for its Heritage monuments and Eco-Tourism destinations.

Its 7 Nights/8 Days colourful journey begins every Monday from Bangaluru and traverses through Mysore/visiting Srirangapatna, Mysore Palace, The Nagarhole National Park (Kabini) and continuing to the historical sites of Shravanabelagola, Belur - the 11th century cradle of Hoysala architecture and a world heritage site, Halebidu, Hampi and thereafter entering into the triangular heritage sites of Badami, Pattadakal, Aihole and finally the Golden Beaches of Goa before ending in Bangaluru.

Karnataka has a blend of heritage places, thick dense forests and holy places. The new concept of 'Homestay' has added a new dimension to Tourism in the State. Hampi and Pattadakal have been declared as world heritage sites.

E-Governance: Online delivery of land records scheme which was started in the year 2000 has successfully digitised 200 lakh land records and enabled the mutation process online making the RTCs easily available in Kiosks at taluk level specially set up for the purpose. It is now decided to redevelop the existing software to upgrade it with enhanced feature and strengthened technical base. The new Bhoomi software will cover all the existing features like linking with Kaveri Programme, Banks, Courts, Phodi process and have new features like linking land acquisition cases, mutations of non-agricultural land.

In addition to this, E-Governance has implemented "Bangaluru One Programme" a multiple service centre where citizens can pay electricity bill, telephone bill etc. and avail around 25 other services under one roof. It has also developed Nemmadi programme in Karnataka by establishing 765 Nemmadi tele centres under PPP in all the Hobli Headquarters to obtain the Income, Birth and Death Certificates. Apart from this it has developed HRMS as one of its core initiatives and most common function across all Departments.

Bhagyalakshmi: With an intention to balance the male-female ratio and to provide moral support to poor families, the Government of Karnataka has introduced an innovative scheme "Bhagyalakshmi". The benefit is limited to two girls in each BPL family. This is an umbrella programme for child development for providing financial assistance of Rs. 10,000/- which will be deposited in the name of girl child born in the BPL family and will be given at the age of 18 years along with accrued interest. During 2007-08 Rs. 132.42 crores have been released and 1.31 lakh beneficiaries have been identified. In the budget 2008-09 recently presented by the Chief Minister has raised the amount to Rs.1 lakh and 266.65 crores have been allocated.

Madilu: This is another scheme introduced to promote the institutional delivery and thereby protecting the maternal as well as the infant's health. Under the scheme a kit consisting of requirements for the baby and mother is provided after delivery. This facility is provided to all BPL families. During 2007-08 about 1.50 lakh were benefitted. Further, the institutional deliveries have increased to 67.97% in 2007-08 compared to 63.82% in 2006-07.

Bhagyaratha: In order to provide better access and further continue education, the state government has contemplated a programme to provide bicycles to both boys and girls studying in 8th standard studying in government and grant-in-aid schools. About 1.75 lakh girls and 2.33 lakh boys belonging to BPL families have been covered under this scheme during 2007-08. This year (i.e. 2008-09) this scheme has been extended to all children studying in 8th standard in government and grant-in-aid schools. Over 7 lakh children are expected to be benefited from this.