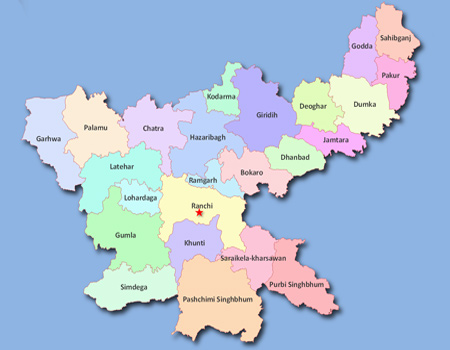 Jharkhand which came into being on 15 November 2000 as the 28th State of the Union is the homeland of the tribals who had dreamed of a separate state for a long time. According to legend, Raja Jai Singh Deo of Odisha had declared himself the ruler of Jharkhand in the 13th century. It largely comprises forest tracks of Chhotanagpur plateau and Santhal Pargana and has distinct cultural traditions. In post-Independence era, the Jharkhand Mukti Morcha started a regular agitation which impelled the Government to establish the Jharkhand Area Autonomous Council in 1995 and finally a full-fledged State.

Jharkhand is bounded by West Bengal in the east, Uttar Pradesh and Chhattisgarh in the west, Bihar in the north and Orissa in the south.

The State has an area of 79,714 sq km of which 18,423 sq km is forest land. Agriculture and allied activities are the major source of Jharkhand's economy. The total cultivable land is only 38 lakh hectare.

Roads:  The total length of roads in the State is 4,311 km. This includes 1,500 km national highways and 2,711 km state highways.
Railways: The state has a well-developed railway system. Ranchi, Bokaro, Dhanbad, Jamshedpur are some of the major railway stations.
Aviation:  Ranchi is connected with Delhi, Patna and Mumbai. Jamshedpur, Bokaro, Giridih, Deoghar, Hazaribagh, Daltonganj and Noamundi have air strips.

Apart from the above, Jharkhand has some famous temples like, Jharkhand Dham, Lagnta Baba Temple/Majar, Bindhvashini Temple, Masanjore Dam, etc.