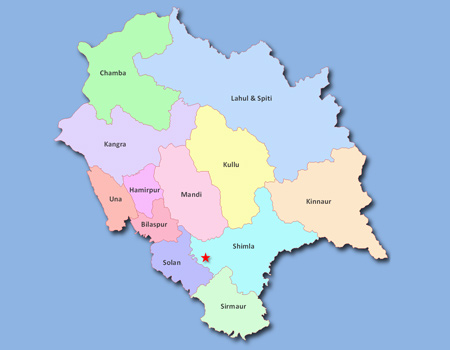 Himachal situated in the heart of the Western Himalaya, identified as "Dev Bhumi" is believed to be the abode of Gods and Goddesses. The entire State is punctuated with stone as well as wood temples. The rich culture and traditions have made Himachal unique in itself. The shadowy valleys, rugged crags, glaciers and gigantic pines and roaring rivers and exquisite flora and fauna compose the symphony that is for ever Himachal.Himachal Pradesh came into being as a Union Territory in April 1948 as a result of integration of 30 princely states spread over 27,000 sq.km. In 1954, when another "C" class state of Bilaspur merged in Himachal Pradesh,its area increased to 28,241 sq.km. The position remained unchanged till 1966. On reorganisation of the State, the hilly areas of Punjab were merged with the State, increasing its size to 55,673 sq.km. Himachal Pradesh today is quoted as a successful model of not only hill area development but also for having realised development in education, health and social services.

Agriculture being the main occupation of the people of Himachal Pradesh has an important role in the economy of the state. It provides direct employment to about 69 per cent of the main working population. Income from agriculture and allied sectors accounts for nearly 22.1 per cent of the total State Domestic Product. Out of the total geographical area of 55,673 sq. km., area of operational holding is about 9.79 lakh hectare owned by 9.14 lakh farmers. The marginal and small farmers possess 86.4 per cent of the total land holdings. The cultivated area in the state is only 10.4 per cent.

Nature has endowed Himachal Pradesh with a wide range of agro-climatic conditions which have helped the farmers to cultivate large varieties of fruits ranging from temperate to sub-tropical. The main fruits under cultivation are apple, pear, peach, plum, apricot and citrus fruits like mango, litchi, guava and strawberry

The Horticulture Technology Mission for the integrated development of horticulture is being implemented with a total outlay of ? 80 crore during the tenth five-year plan period. This Mission is based on the "end to end approach" taking into account the entire gamut of horticulture development with all backward and forward linkages in a holistic manner. Under this scheme, four centres of excellence are being created in different Agro-Climatic Zones with common facilities like water harvesting, vermicompost, greenhouses, organic farming and farm mechanisation.

Roads are the lifelines and major means of communication in the predominantly hill State of Himachal Pradesh. Out of its 55,673 sq. km area, 36,700 sq. km is inhabited out of which 16,807 inhabited villages are scattered over slopes of numerous hill ranges and valleys. Realising the importance of construction of roads for connecting production areas with market centres, Himachal Pradesh Government has decided to connect every panchayat with roads in the next two years. When the Pradesh came into existence in 1948 there were 288 km. of roads. This number has gone up to 33,171 km by 15 August 2010.

Himachal Pradesh has immense hydro-potential in its five river basins. Chenab, Rabi, Beas, Satluj and Yamuna which emanate from the western Himalayas pass through the State. The strategy of devlopment in the power sector comprises expeditious actualisation of the Hydro Electric Potential and introduction of power sector reforms to bring efficiency in the sector and provide high quality power to the consumers at reasonable rates besides availablity of abundant power to industrial and tourism sectors. The total identified potential in the State stands at 23,230 MW which is one fourth of India's total hydro-power potential. Presently out of this 6,480 MW has already been harnessed by various agencies. Projects aggregating to 7,602 MW are under execution.

There is no denying this fact in view of the way the Government has embarked upon an accelerated Power Development Programme. The State is speedily moving towards becoming a "Power State" of the Country. All the census villages in the State have been electrified and now left-out hamlets are being covered.

Industrial development has been given big boost in the State. Pollution free environment, abundant availability of power and rapidly developing infrastructure, peaceful atmosphere, and responsive and transparent administration are some of the added attractions and advantages that the entrepreneurs get in Himachal Pradesh. 349 large and medium and about 33,284 small-scale industrial units with an investment of about Rs. 4,822.54 crore have been set up in the state generating employment for 2 lakh persons. The sector is contributing 17 per cent to the State Domestic Product and the annual turnover on this account is about Rs. 6,000 crore.

The Government of Himachal Pradesh has developed an IT Vision-2010 in collaboration with NASSCOM to make Himachal Pradesh an IT destination. Under the IT policy, it has been decided to accord the status of industry to all IT projects including IT related services and educational institutions. As such, all the incentives available for industrial units are also being given to all IT units, and IT related services.

Net sown area in the State was 5.83 lakh hectare till 2007. Villages have been provided with the facility of drinking water. Over 15,000 hand pumps have been installed in the State so far. For better reform in water supply and irrigation sector/the State Government has taken up a WASH project with the total cost of ? 339 crore for irrigation as well as for drinking water supply schemes with Gesellschaft for Technische Zuoammeuorbeit (GTZ).

Efforts are being taken to bring maximum area under green cover by implementing State's own projects, Government of India's projects and also through external aided projects. The World Bank has also sanctioned a ? 365 crore Integrated Watershed Development Project for the Mid Himalayas. 545 panchayats of 42 developmental blocks in 10 districts would be covered during the next six years. There are 2 National Parks and 32 wildlife sanctuaries in the State. Total area under wildlife sanctuaries is 5562 sq. km; area under National Parks is 1440 sq. km and total area of Protected Area Network is 7002 sq. km.

Himachal Pradesh has emerged as the third best State in terms of over-all development and performance. Himachal Pradesh has been adjudged number one State in Primary Education and teacher-student ratio. Himachal Pradesh has witnessed literacy revolution as it is second only to Kerala in literacy. The State has about 17,000 educational institutes, including three Universities, two Medical Colleges, one Engineering College in the Government Sector and a number of technical, professional and other educational institutions. The literacy percentage of the State according to 2001 Census is 77.13 wThich is much higher than the national average of 65.38. The State Government's emphasis now is to ensure qualitative improvement in the education besides need based expansion. Sarva Siksha Abhiyan an ambitious project worth ? 532 crore is being evolved with the main objective of achieving universalisation of elementary education with the sole aim to spread the light of knowledge to every nook and corner of the State.

Tourism Industry in Himachal Pradesh has been given very high priority and the Government has devloped an appropriate infrastructure for its devlopment which includes provision of public utility services, roads, communication network, airports, transport facilities, water supply and civic amenities, etc. The State Government is poised to transform the State into "A Destination for All Seasons and All Reasons". The State Tourism Devlopment Corporation contributes 10 per cent to the State exchequer. The corporation contributes more than ? 200 crore per annum by way of Sales tax, luxury tax and passanger tax. In the year-2007, tourist arrivals in the State were 8.3 million.

The State has a rich treasure of places of pilgrimage and of anthropological value. The State has also the pride of being the home to rishis like Vyas, Parashar, Vashist, Markandey and Lamas, etc. Hot water springs, historic forts, natural and man-made lakes, shepherds grazing their flock are sources of immense pleasure and joy to the tourist.

The State Government is aiming at promoting sustainable tourism, encouraging private sector to develop tourism-related infrastructure in the State without disturbing the existing ecology and environment. The main thrust is on employment generation and promoting new concepts of tourism in the State. In order to increase the duration of the stay of the visitors/tourists, special emphasis is being laid on the development of activities based on tourism.

For the promotion and development of the State from the tourism point of view, the Government is focusing on the following areas:

(2)Identification of new areas/tourist destinations and promotion of village tourism.