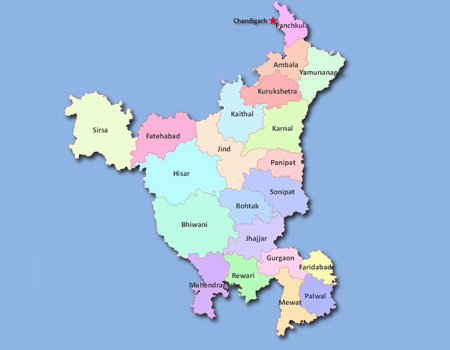 Haryana has a proud history dating back to the Vedic Age. The State was home to the legendary Bharata dynasty, after which the country was named Bharat. The land of Haryana has been the cradle of Indian culture and civilization. Archaeological investigations done by Guy E. Pilgrim in 1915 established that 15 million years ago, the early man lived in the Haryana Shivaliks. Vamana Purana states that King Kuru ploughed the field of Kurukshetra with a golden plough, drawn by the Nandi of Lord Shiva, and reclaimed an area of seven 'kosas'.

Replete with myths, legends and Vedic references, Haryana's past is steeped in glory. It was on the soil of Haryana that saint Ved Vyas wrote Mahabharata. It was here that Lord Krishna preached the gospel of duty to Arjuna about 5,000 years ago. It was here that the epic battle of Mahabharata was fought. Being the gateway to north India, the region has been the battleground of many a war. The Huns, the Turks and the Tughlaqs invaded India and decisive battles were fought on this land. At the end of the 14th century Tamur led an army through this area to Delhi. Later, the Mughals defeated the Lodhis in the historic battle of Panipat in 1526. Another decisive battle was fought in 1556 at this very site, establishing the supremacy of the Mughals up to the advent of the British rule, and the rise of Delhi as the imperial capital of India.

Bold in spirit and action, the people of Haryana have always formed a bulwark against the forces of aggression and anti-nationalism. In fact, the history of Haryana reads like the saga of the struggle of a righteous, forthright and proud people of the state, known for their traits of bravery and valour.

An adjunct to Delhi, Haryana practically remained anonymous until the First War of India's Independence in 1857. After the British crushed the rebellion, they deprived the Nawabs of Jhajjar and Bahadurgarh, the Raja of Ballabgarh and Rao Tula Ram of Rewari in Haryana region, of their territories. These were either merged with British territories or handed over to the rulers of Patiala, Nabha and Jind, making Haryana a part of the Punjab province. With the reorganization of Punjab on 1 November 1956. Haryana was born as a full-fledged state. Strategically located, Haryana is bounded by Uttar Pradesh in the east, Punjab in the west, Himachal Pradesh in the north, and Rajasthan in the south. The National Capital of Delhi juts into Haryana. With just 1.37 per cent of the total geographical area and less than two per cent of India's population, Haryana has carved a place of distinction for itself. Whether it is agriculture or industry, canal irrigation or rural electrification, Haryana keeps marching towards modernity. The state enjoys the unique distinction of being among the first to provide electricity, metalled roads and potable drinking water to all its villages. Ranked among the most prosperous states in India, Haryana has the second highest per capita income in the country, after Goa.

Agriculture is the mainstay of more than 65 per cent population in Haryana with the second largest contribution to the food bowl of the country. Under the diversification of crops, more and more area is being brought under cash crops like sugarcane, cotton and oil seeds, vegetable and fruits. Sustainable agriculture is being promoted through the propagation of resource conserving technologies and organic farming. Dhaincha and Moong have also been encouraged to maintain soil fertility.

Releasing the importance of Information Technology in the globalized world, the state government has formulated an IT Policy which provides several incentives for setting up Technology Parks, Cyber Cities, IT corridors and ITES industry in the State. Haryana has emerged as a preferred investment destination for IT industry as well. Out of the total 46 SEZs formally approved for the state, 35 are in the IT sector. Of these, three IT SEZs are in an advanced stage of completion. In addition, the state has okayed 33 proposals for setting up IT/Cyber Parks. The software exports from Haryana now aggregated ? 21,000 crore.

The investment and industry-friendly policies pursued by the state government have made Haryana the cynosure of all investing eyes, and put the state on threshold of industrial revolution. Small wonder then, that there are more than 1,354 large and medium and 80,000 small-scale units dotting the industrial landscape in the State. Haryana today is the largest producer of passenger cars, tractors, motorcycles, bicycles, refrigerators, scientific instruments, etc. Besides, it is the largest exporter of basmati rice. Panipat handlooms and carpets are known all over world besides its lip-ticking Panchranga Achaar.

The healthcare has been made both affordable and reachable by setting up a state¬wide network of district and sub-divisional hospitals. These are being beefed up with staff and equipment and deficiencies in referral services are being removed. The state-wide network of health centres includes 52 hospitals, 94 community health centres, 441 primary health centres, 2,465 sub-centres, 15 district TB Centres, 639 Ayurvedic, Homeopathy & Unani Centres, 16 urban health posts, the Post-Graduate Institute of Medical Education & Research at Rohtak, and Medical Colleges at Agroha (Hisar) and Mullana (Ambala). Besides, as many as 516 Delivery Huts have been set up to provide delivery services in clean and hygienic environment. Major infrastructural improvements are being made to upgrade the existing health institutions to the Indian Public Health standards.

The 1,429-strong network of canals constitutes the bedrock of the irrigation system in Haryana with 6.83 lakh tubewells and pumpsets playing no mean role. 1,92,980 hectare of land is under agriculture in the state. Starting with 20,000 tubewells in 1966, the state had 4.91 lakh tubewells in March, 2010. The major irrigation projects in the state are Western Yamuna Canal System, Bhakra Canal System, and Gurgaon Canal System. Giving practical shape to the lift irrigation system for the first time in India, Haryana has raised water from lower levels to higher and drier slopes through the JLN Canal Project. Haryana is among the beneficiaries of the multipurpose Sutlej-Beas project, sharing benefits with Punjab and Rajasthan.

Haryana is shaping into a modern Takshila. Making elementary education available at reachable distance to all children, and opening/bringing a large number of institutes of higher learning, offering global standard education, the state is moving fast and forward on the road to becoming a hub of education. According to 2001 census, the literacy rate in Haryana is 67.91 per cent against the all India literacy rate of 65.38 per cent. Haryana's female literacy rate is 55.73 per cent and male literacy rate 78.49 per cent.

Road and rail transport are the main carriers of passenger traffic in Haryana with aviation too playing a small role. Haryana is one state where all villages are linked with metalled roads. The length of the roads in the state is more than 35,303 km. Haryana Roadways number of buses is 3246.Then, railways play an important role in carrying both interstate and intra¬state passengers. Kalka, Ambala, Kurukshetra, Panipat, Rohtak, Jind, Hisar and Jakhal are important railway stations. There is a railway workshop at Jagadhari. Aviation too plays its role. There are civil aeorodromes at Pinjore, Karnal, Hisar, Bhiwani and Narnaul.

A pioneer in highway tourism, Haryana has set up a vast network of 43 tourist complexes all over the state. Having 846-roomed accommodation in the various outfits, Haryana Tourism attracts 63 lakh tourists every year. The state government has adopted a multi-pronged strategy to promote tourism. Tourist complexes have been set at strategic points along the highways passing through the state and tourist complexes have been developed around Delhi with the intent of promoting leisure tourism and conference tourism.

Besides, tourist facilities have been set up at the district headquarters, and in important towns, to cater to the needs of tourists and local people. Some of the important tourist complexes are Surajkund and Baddhkal Lake near Delhi; Sultanpur birds sanctuary (Sultanpur); Sohna and Damdama in Gurgaon; and the fascinating pocket of pines in the Morni Hills. The other important resorts are ethnic India Rai, Blue Jay (Samalkha), Skylark (Panipat), Kama Lake and Oasis (Uchana), Parakeet (Pipli), Kingfisher (Ambala), Magpie (Faridabad), Dabchick (Hodal); Shama (Gurgaon); Jungle Babbler (Dharuhera); Gaurriyya (Bahadurgarh); Myna (Rohtak); Blue Bird (Hisar); Red Bishop (Panchkula); and Pinjore Gardens (Pinjore).