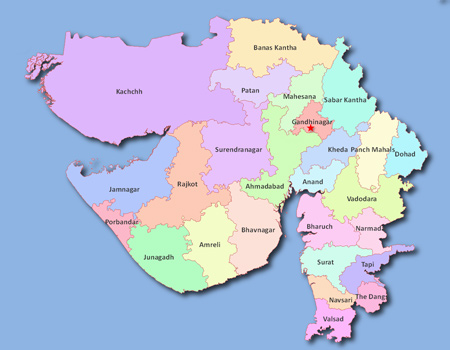 The history of Gujarat goes back to 2000 BC. It is believed that Lord Krishna left Mathura to settle on the west coast of Saurashtra which later came to be known as Dwarka, the gateway. Later it saw various kingdoms : Mauryas, Guptas, Pratiharas and others. It was during the rule of Chalukyas ( Solankis) that Gujarat witnessed progress and prosperity. In spite of the plunderings of Mahmud Ghazani, the Chalukyan kings were able to maintain general prosperity and well-being of the State. After this glorious respite, Gujarat faced troubled times under the Muslims, Marathas and the British rule. Before Independence, the present territories of Gujarat used to be in two parts - the British and the Princely territories. With the re¬organisation of the States, the Union of the States of Saurshtra and the Union Territory of Kachchh along with the former British Gujarat, became a part of the biggest bilingual State of Bombay. The present State of Gujarat came into being on 1 May 1960. It is situated on the west coast of India. The state is bounded by the Arabian Sea on the west, Pakistan and Rajasthan in the north and north-east respectively, Madhya Pradesh in the south-east and Maharashtra in the south.

State Government has adopted a pro-farmer approach to achieve long term growth. The government is giving high priority to water conservation and water management activities in order to provide rain water to the arid areas of the state. 'Krishi Mahotsav' is being organized every year to make aware the farmers with modern technologies and methods of scientific farming. IN the year 2010, the state has witnessed 63.50 lakh MT production of food crops, 30.5 lakh MT production of oilseeds and 104.55 lakh bale production of cotton.

In the golden jubilee year (2010-11) of the state, the state government organized 'Vibrant Gujarat Global Investors' Summit (VGGIS) which was truly matchless inthe financial history of our nation. The summit attracted investors from across the world. As many as 8,380 MoUs were signed which is expected to fetch an investment of around ? 20.83 lakh crore. This will also translate into a job opportunity for lakhs of youths of the state, which is going to prove as a distinctive achievement of the state.

The total irrigation potential through surface water as well as ground water has been assessed at 64.88 lakh hectare including 17.92 lakh hectare through Sardar Sarovar ( Narmada ) Project.

Gujarat has become the first state in the nation to start a separate department of 'climate change' to tackle the issue of global warming.Gujarat has become the first state in the country to come with solar policy in 209, with a view to give boost to the solar energy sector.With a view to provide the benefits of electricity to the weaker sections of the society, the state government provided as many as 2,12,236 power connections by December 2010 under various schemes.

The total installed capacity for the state including central sector project increased to 12512 MW as on October 2010. All the villages have been covered under the scheme Jyoti Gram Yojana of Gujarat State Government.

Roads:  Road network is playing crucial role in the development of the state. As a novel approach, the state government has involved private sector in the building of a sound road network. With a view to meet the needs of increasing population, BRTS facility has been started in the state's mega city Ahmedabad for speedy commuting.
Railway: It has very large Railway network all over the state.
Aviation:  At present, the state has got 20 airports in all. Gujarat Government is in the process of getting 11 new airports for the pilgrim places of the state which will connect all the major pilgrim places like Pallitana, Dwarka, Ambaji and others on the air-route.

The main airport of Gujarat at Ahmadabad is connected with Mumbai, Delhi and other cities by daily services. Ahmedabad airport has now got up the status of an International Airport. Other domestic airports as Vadodara, Surat, Bhavnagar, Bhuj, Jamnagar and Rajkot.
Ports:  During the last decade, Gujarat has acquired a status of an important maritime state of the country. Nearly 80% of the total traffic on the non-major ports and about 25% of the total traffic on all the ports of India is being recorded on the ports of Gujarat, which is a matter of pride for the state.

Tarnetar fair is held at village Tarnetar in the honour of Lord Shiva on the 4th, 5th, and 6th days of the bright half of the month of Bhadrapada (August/September). Madhavrai fair at Madhavpur near Porbandar is held to celebrate the marriage by elopement of Lord Krishna and Rukmani, on the ninth day of the bright half of the month of Chaitra (March/April). Ambaji fair dedicated to Amba-mother goddess is held in Banaskantha district. The biggest annual fair and Janmashtami the birthday of Lord Krishna is celebrated at Dwarka and Dakor with great enthusiasm. Other festivals are Makar-Sankranti, Navratri, Dangi Darbar, Shamlaji fair and Bhavnath fair.

The Gujarat Secondary and Higher Secondary Education Board which is also known as GSEB and the website is gseb.org is a government body which is created and is maintained by the state government of Gujarat. 10th result Gujarat board online will be publish on gseb.org website.The body is mainly responsible for directing and conducting the state’s secondary and higher education exams.