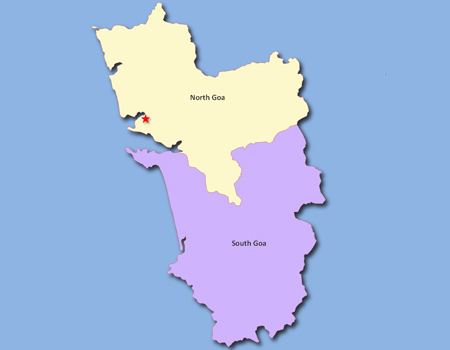 Goa, known in the bygone days as Gomanchala, Gopakapattam, Gopakapuri, Govapuri, Gomantak, etc., abounds in a rich historical heritage. Early history of Goa is obscure. In the first century of the Christian era, Goa was a part of the Satavahana empire, followed by the Kadamba, the Rashtrakutas of Malkhed, the Chalukyas and the Silharas. The empire of the Yadavas by the end of the 14th century was displaced by the Khiljis of Delhi and thus Muslim rule came to Goa. After the discovery of the sea route to India by Vasco-da-Gama in 1498, many Portuguese expeditions came to India. In 1510, Alfonso de Albuquerque with the help of the emperor of Vijayanagar attacked and captured Goa. With the arrival of the Jesuit priest Francis Xavier in 1542 proselytisation began in Goa. However, the Portuguese continued to rule over the territory except for an interlude during the latter half of the 17th century when Shivaji conquered a few areas in and around Goa. Even after India's independence, Goa continued to be in the hands of the Portuguese. However, they could not fulfil the aspirations of the Goan people and ultimately on 19 December 1961, Goa was liberated and made a composite union territory with Daman and Diu. On 30 May 1987 Goa was conferred statehood and Daman and Diu was made a separate union territory. Goa is situated on the western coast of the Indian Peninsula. On its north runs the Terekhol river which separates Goa from Maharashtra and on the south lies North Canara district of Karnataka. On the east lie the Western Ghats and in the west the Arabian Sea. Panaji, Margao, Vasco, Mapusa and Ponda are the main towns of Goa. Goa is currently celebrating the Golden Jubilee of its liberation and 25 years of attainment of full-fledged Statehood.

The total cultivated area in Goa is 160320 hectares while the total production was 108333 tons. A total of 30,632 hectares area was cultivated under paddy during last kharif season. It is proposed to take up soil testing and soil mapping of Queperm and Sattari to know the soil fertility. Budgetary provision of Agricultural Department was enhanced from ? 17 crores four years ago to ? 70 crores. Several schemes have also been launched by the Government through Directorate of Agriculture to promote farming and attract youth towards this activity. Farmers can avail the benefit of upto 90% on solar power battery fencing scheme. A subsidy of upto 90% is also provided for construction of polyhouses and green houses. Similar subsidies are provided for drip irrigation and for construction of Biogas plants. In order to enhance the yield of sugarcane it is proposed to provide 90 per cent subsidy on Drip Irrigation. The Government has also taken steps to recognize the contribution from Biogas to contribution of progressive farmers to the States economy by awarding them three State level awards of ? 2.00 lakhs, ? 1.00 lakh and ? 50,000 in the name of Krishi Ratna, Krishi Vibhushan and Krishi Bhushan respectively. This initiative will undoubtedly encourage the farmers to adopt modern agriculture techniques and boost production in Goa. The Government has spent an amount to the tune of ? 12.5 crores on extending subsidy to several farmers.

It is proposed to provide a insurance cover through an insurance policy Scheme to be called as 'Swaranjayanti Aarogya Bima' to the entire resident population of the State similar on the lines of Central Government's health insurance scheme for BPL families called as Rashtriya Bima Swasthya Yojana.

With the commissioning of dams like Selaulim and Anjunem and other minor irrigation projects, area under irrigation is rising steadily. Total irrigation potential created by these projects is 43,000 hectares. All villages have been electrified leading to hundred percent coverage.

All schemes under the State Industrial Policy as well as the State Biotoch Policy will continue to be in force and will be populatized further. The setting up of Goa IT Knowledge Centre at Verna to provide incubation facilities in the IT sector is proposed. To provide encouragement to artisans of Goan handicrafts, it is proposed to develop Goa Haat-cum-shilpagram, new emporiums in Goa and outside Goa & develop e-portal for the sale of handicraft items across the globe. The Government also intends to set up a marketing centre for women Self Help Groups (SHG) at Margao to provide forward and backward linkages.

The Departments of Information and Publicity with is a nodal agency for dissemination of information and policies and programmes of the Government, is implementing the scheme such as interest on computer loan to journalists, financial assistance to indigent journalists, Patrakar Kritandnyata Nidhi Goa Journalists Welfare scheme (Pensions scheme); Goa Scheme of financial assistance for films, Songs and Drama Services and others. The Pensions for Journalist has been enhanced from ? 2000 to ^ 4000 per month. It is also proposed to provide a well equipped Media Facilitation Centres at each taluka Headquarters. The Entertainment Society of Goa, a special vehicle has been established for organizing film related activities including organization of International Film Festival of India. A scheme to provide financial assistance to produce films is implemented through this special vehicle.

The Government desires to give thrust on Library movement in Goa in order to make the libraries as information and knowledge centres. This year Goa is celebrating the birth centenary year of Bhausaheb Bandodkar, the first Chief Minister of Goa who was a man of vision. He had established many socio-cultural institutions and patronized them. Two of these include, Vivekanand Society, Panaji and Janata Vachanalaya, Mormugao. In appreciation of their contribution to the society and in honour of Bhausheb Bandodkar, it is proposed to provide a grant of ? 5 lakhs each.

The Government intends to document all forms of folk art, folk festivals, other cultural traditions and intangible heritage of Goa State, through audio-video documentation, for which adequate budgetary provision has been provided within the existing scheme of Directorate of Art & Culture.

The Government has strong commitment to enhance IT literacy at school level itself, and to strengthen computer laboratories in all high and higher secondary schools in the State. The Education Department is in the process of strengthening the computer laboratories by providing an additional 10 computers, 2 printers and UPS, web camera and internet connectivity. The Scheme of School Computer Laboratories shall be taken on priority for implementation as mentioned above and would replace the Cyberage (EDUNET) Scheme from 2010-11. The Government also intends to implement the Rashtriya Madhyamik Shiksha Abhiyan, a Central Sector Scheme in the State.

Roads: Of the motorable roads, national highway constitutes 264 km, state highways 279.4 km and other roads MDR/RR/4501.18 kms.
Railways: Goa is linked with Mumbai, Mangalore and Thiruvananthapuram through the Konkan Railway, which has introduced several fast trains on these lines. Vasco da Gama is connected with Bengaluru and Belgaum on the South Central Railway, presently for goods traffic only.
Aviation: Mumbai, Delhi, Thiruvananthapuram, Cochin, Chennai, Agati and Bengaluru are linked with Dabolim through regular Airlines services.

Ports:  Mormugao is the major port in the State. Mormugao handles cargo vessels. Minor ports are located at Panaji, Tiracol, Chapora Betul and Talpona, out of which Panaji is the main operative port. One off-shore berth at Panaji has also been commissioned.

As decided by the United Nations the Goa Government is celebrating this year as International year of Forests. Goa has a good forest cover of 34 per cent against the national requirement of 33 per cent and nearly 62 per cent tree cover. During the year 6 lakh seedlings were planted and nearly one lakh seedlings distributed to various institutions and industries to make tree planting a peoples movement.

New Rural medical dispensary was established at Keri-Sattari equipped with Pathology Lab, dental and ultra sound facilities. Goa became the first state in the country to launch diabetic registry. The new District hospital at Margao is under construction which once complete will cater to the health care needs of entire south Goa. New District Hospital as Mapusa has been completed. The new 170 bedded

ID hospital at Ponda is nearing completion. Other new hospitals at Sanqulim, Bicholim and Valpoi are under construction.