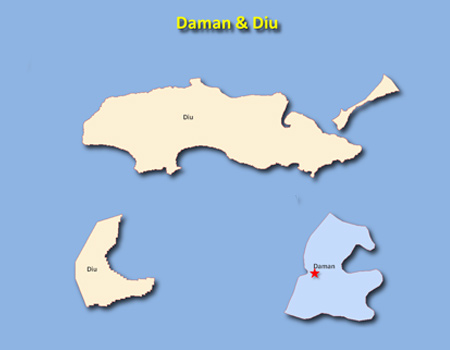 Daman and Diu along with Goa was a colony held by the Portuguese even after Independence. In 1961, it was made an integral part of India. After Goa was conferred with statehood, on 30 May 1987, Daman and Diu was made a separate Union Territory. Daman lies about 193 km away from Mumbai. It is bounded on the east by Gujarat, on the west by the Arabian Sea, on the north by the Kolak river and on the south by Kalai river. The neighbouring district of Daman is Valsad in Gujarat. Diu is an island connected by two bridges. The neighbouring district of Diu is Junagadh of Gujarat.

Total irrigated area is 393.93 ha. and un-irrigated area is 3304.73 hectare as per the Agricultural Census 2000-01. In 2000-01 the net area under cultivation was 3375.65 ha. Important field and garden crops are paddy, ragi, bajra, jowar, groundnut, pulses and beans, wheat, banana, sapota, mango, chickoo, coconut and sugarcane. There are no major forests in the territory.

There are 2930 small-scale and medium-scale industries in Daman and Diu. Two industrial areas have been developed by Omnibus Industrial Development Corporation at Daman. The other industrial areas are Dabhel, Bhimpore, Kachigam and Kadaiya.

All villages have been electrified. Daman and Diu have got adequate power allocation from Central sector power stations in western region.

Aviation : There are airports both in Daman and Diu. Diu is connected by air and there is regular air service from Mumbai to Diu.