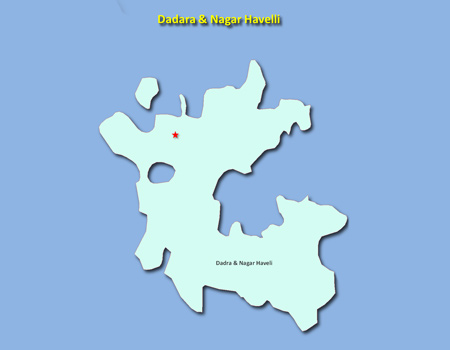 After prolonged skirmishes between the Portuguese and Marathas, on 17 December 1779, the Maratha Government assigned the aggregated revenue of Rs. 12,000 in a few villages of this territory to the Portuguese as compensation to ensure their friendship. The Portuguese ruled this territory until its liberation by the people on 2 August 1954. From 1954 till 1961 the territory functioned almost independently by what was known as 'Tree Dadra and Nagar Haveli Administration". However, the territory was merged with the Indian Union on 11 August 1961 and since then is being administered by the Government of India as a Union Territory. After liberation of the territory from Portuguese rule, a Varishtha Panchayat was working as an advisory body of the Administration. This was dissolved in August 1989 and a Pradesh Council for Dadra and Nagar Haveli District Panchayat and 11 Village Panchayats were constituted as per constitutional amendments at All India level. The U.T. of Dadra and Nagar Haveli has an area of 491 sq km and it is surrounded by Gujarat and Maharashtra. It consists of two pockets, namely, Dadra and Nagar Haveli. The nearest railway station is at Vapi which is 18 km from Silvassa.

Dadra and Nagar Haveli is a predominantly rural area with about 79 per cent tribal population. It has about 21,115 hectare under cultivation. Major crop is paddy (Kharif) while Nagli and hill millets are the other crops of the area. Among fruits Mango, Chiku, Banana, etc. are also produced. Forests cover 40 per cent of the total geographical area.

Sugarcane cultivation has also been taken up in a big way since the last few years. And efforts are afoot to adopt a multiple cropping system in assured irrigated areas. The organic farming scheme will shortly be implemented in Dudhani and Mandoni patelads. To this end, 60 Kisan Credit Cards have been issued.

The Wadi Development programme in the tribal area of both Dadra and Nagar Haveli is implemented by the N.G.O., B.A.I.F. with the financial allocation from NABARD; a total of 800 tribal and scheduled caste families will benefit.

Prior to 1965-66 there was no industry in the Union Territory. There were a few traditional craftsmen who used to make pots, leather items, viz., chappals, shoes and some other items of bamboo. Industrial development started on a low-key during 1967-68 with the establishment of an industrial estate under the cooperative sector by Dan Udyog Sahakari Sangh Ltd. Thereafter, three Government Industrial Estates have been developed at Silvassa, Masat and Khadoli in the U.T. With the inception of the economic liberalization policy, a real boost in industrial development was seen. There are 1863 small sector industrial units and 430 MSI/LSI units functioning in the U.T. providing gainful employment to over 46,000 people.

Prior to liberation of the territory, there was no irrigation facility and cultivators had to fully depend upon rainfall. After the merger of the territory with the Indian Union, adequate steps were taken under minor irrigation sector. So far 128 lift irrigation schemes have been completed on irrigation wells, surface water sources like rivers, check dams at various places in the territory creating additional irrigation potential of 1,851 hectare. Under medium irrigation project viz., Damnganga Reservoir Project, about 115 km of minor canals and distributaries are falling in the area of this Union Territory. Development works have been completed in field channels in all respects in 4,300 hectare and testing is done in 4,049 hectare.

There was no rural electrification prior to liberation of this territory. The electricity was provided with only one DG Set which was installed and operated in Silvassa Town for VIPs at Circuit House.

After liberation, the UT Administration commenced rural electrification work with the co-operation of neighbouring State of Gujarat and completed electrification work in 25 villages by 1976. The power demand of the UT is met by Gujarat Electricity Board through a single Circuit from Vapi-Silvassa and distributed amongst limited number of consumers. The first 66 KV Sub-Station was established at Amli in 1979. With the commissioning of the said Sub-Station, the electricity department is in a position to provide electricity to all villages.

One more 220/66 KV, 2x160 MVA sub-station at village Khadoli has been approved by the Ministry of Power. The Power Grid Corporation of India will execute this work, which is likely to be completed within three years. In addition to this, a proposal for the establishment of various 66/11 KV sub-station at Vaghdhara, Athal, Piparia, Sayli, Velugam etc. is in the pipeline.

The Power requirement of the territory is being met from Central Sector Power Generating Stations located in the western region. At present the power allocation from the Central Sector is 270 MW. The power demand has increased tremendously due to rapid industrialisation with the extension of Tax Holiday benefit to this UT by the Government of India.

The Union Territory depends heavily on Maharashtra and Gujarat road network as the territory can be accessed only after crossing these two States from Mumbai. At present road length is about 635 km out of which 570 km is surfaced. Almost all villages are connected with all-weather roads. The rail route from Mumbai to Ahmedabad links Vapi also. Mumbai is the nearest airport. Recently, the work of widening of roads in the Union Territory has been taken up to meet the requirement of increasing vehicular traffic.

To meet the need of rapid industrialisation, four-laning work has been taken up in Silvassa and adjoining areas, besides other spillover works. Converting of two-lane road to four-lane road for a length of 17.69 km has been completed. The Dadra — Tighra road is under progress and during 2007-08, another 5.70 kms length of road connecting Silvassa and Naroli was likely to be converted into a four-lane drive.

Tourism sector has been assigned high priority keeping in view the dense forest area and favourable climate.The prominent places of tourist interest are Tadekeshwar Shiva Mandir, Bindrabin, Deer Park at Khanvel, Vanganga lake and Island Garden, Dadra, and Vanvihar Udhyan Mini Zoo, Bal Udhyan, Tribal Museum and Hirvavan Garden at Silvassa. The development of water sports at Dudhani has been completed. The construction of an Amphitheatre close to Yatri Niwas, Silvassa is under progress. To encourage tourism activities, some traditional and modern cultural activities like celebration of Tarpa Festival, Kite festival, World Tourism day, etc., are organised every year.