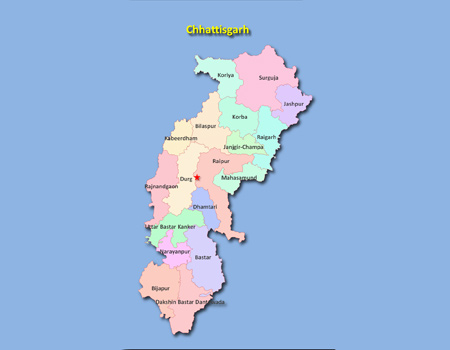 Chhattisgarh, carved out of Madhya Pradesh came into being on 1 November 2000 as the 26th State of the Union. It fulfils the long-cherished demand of the people. In ancient times the region was known as Dakshin-KausaL This finds mention in Ramayana and Mahabharata also. Between the sixth and twelfth centuries Sarabhpurias, Panduavanshi, Somvanshi, Kalchuri and Nagvanshi rulers dominated this region. Kalchuris ruled in Chhattisgarh from 980 to 1791 AD. With the advent of the British in 1845, Raipur gained prominence instead of capital Ratanpur. In 1904 Sambalpur was transferred to Orissa and estates of Sarguja were transferred from Bengal to Chhattisgarh.

Total Geographical area of Chhattisgarh State is 137.90 lake ha out of which arable land is about 47.70 lakh ha. In the state, area under kharif crop is around 47.60 lakh a and rabi crop is 16.61 lak ha. At present due to various irrigation sources, area in kharif season is 13.55 lakh ha which is about 29% of arable area.

In Chhattisgarh, out of 34.61 lakh farms family, 77% belongs to small and marginal farmers. Here 33% of farm families belong to Schedule Tribe and 12% belongs to Schedule Caste. The agro climate zone of Chhattisgarh are three viz. Northern Hill Zone, Chhattisgarh Plain and Plateau of Baster. The average annual rainfall of this area is about 1307.3 mm.

The main kharif crop of this region is paddy which is about 76% of total kharif crops. Apart from it other main crops grown here are Maize, Soybean, Groundnut, Urdbean and Pigeon pea. Similarly main rabi crops growth here are Wheat, Gram Latyrus, Mustard and Linseed.

E-Governance in Chhattisgarh is oriented towards ensuring people, access to government; this makes the government even more responsive and transparent. Chips was setup with a high powered governing council under the Chief Minister's chairpersonship, to act as a prime mover for IT and Biotechnology in the state. All citizen services of e-governance are under one umbrella project called CHOICE. Chhattisgarh got the UNDP Award 2007 for its Human Development Report, using Information technology for the betterment of citizens.

Chhattisgarh has the perfect geological set up to host a number of economically crucial minerals. Large deposits of coal, iron ore, limestone, bauxite and dolomite are found in various parts of the state. Districts of North Chhattisgarh such as Surguja, Raigarh, Koriya and Bilaspur are known for huge coal deposits. The state has 50846 million tonnes reserve in coal as on 1.4.2012 in 12 coal fields. In 2010-11 the state produced 113.8 million tonnes of coal.

Mineral activities contribute approximately 13.63% to the state G.S.D.R against the national figure of 2.5%.

Total 8 Major 33 Medium and 2355 Minor irrigation project have been completed till March 2012.

The capacity of State Electricity Production Company is 1924.70 MW of which 1786 MW in thermal and 138.7 MW yodel electricity.

More than 73 MOUs signed for establishment of power plants with anticipated power production of 660000 MW.

9,718 kms of roads have been constructed under Pradan Mantri Grameen Sadak Yojna. To connect interior areas of State, not covered under PMGSY, State Government has started Mukhya Mantri Gram Sada Yojna and 4000 kms of Roads worth ? 2000 crores will be constructed within two years.

Chhattisgarh is famous for its festivals. Pola, Nawakhai, Dussehara, Deepawali, Holi, Govardhan Pooja are celebrated with gaiety and festivity.