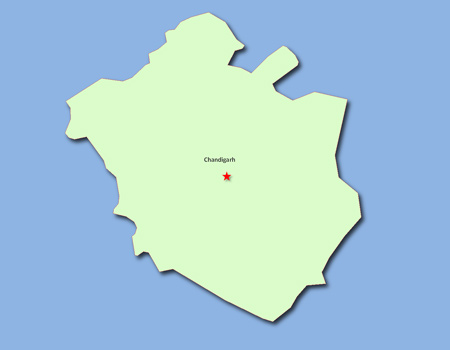 Chandigarh is a fully grown town of most modern architectural splendour. The city nestles in a picturesque setting in the foothills of Shivalik hills and enjoys the popular epithet the "City Beautiful". Representative of modern architecture and town planning, the city is a creation of the French Architect, Le Corbusier. Chandigarh and the area surrounding it were constituted as a Union Territory on 1 November 1966. It serves as the joint capital of both Punjab and Haryana States. It is bounded on north and west by Punjab and on the east and south by Haryana.

Chandigarh Administration is moving on four broad fronts. First, it is its aim to provide, with the help of information technology, an accessible and transparent administration. Chandigarh was among the earliest to implement the provisions of the Right to Information Act. A number of services, for which citizens earlier had to go to government offices, are now available on computer and mobile phones. All rules are being reviewed to see what simplification can be carried out to make them user-friendly. The purpose is to minimise the exercise of discretion, and minimise the leg-work of the citizen in dealing with the Administration.

Secondly, the Administration is working towards a higher rate of economic growth by encouraging economic activities which provide greater value addition, such as knowledge based industries, high-end commercial activity, etc. Chandigarh already has the highest per capita income in the country.

Thirdly, the Administration is seeking to provide infrastructural services such as electricity supply, water supply, health and educational services and public transport which should compare with those in advanced countries.

Fourthly, the Administration is all too conscious of the fact that the benefits of development do not reach everyone equally. Hence there is a special emphasis on reaching out to those whom development has by-passed.

The Union Territory Chandigarh has limited area under Agriculture. The agricultural land is being gradually acquired for the expansion of Chandigarh City, and cultivated area has shrunk from 5,441 hectares in 1966 to 1,400 hectares in 2002-03. The main sources of irrigation are deep-bore tube-wells installed by the Administration and shallow tube-wells installed by individual farmers. The main crop of foodgrain is wheat and it is sown nearly in 700 hectares of land. The Department is making efforts to promote techniques of harvesting by following measures:
Extension and Farmers Study/Training Tour
Development of Kitchen Garden
Soil and Water Conservation.

The Administration is developing the Phase-Ill of the Industrial Area at the revenue estate of village Mauli Jagran. 152 acres of land have been acquired.

Construction work of Chandigarh Administration's visionary project Rajiv Gandhi Chandigarh Technology Park (RGCTP) is in full swing. Completion of Phase III will provide direct employment to 35000 professionals, thereby increasing the direct employment of RGCTP to 67,000 and would create 2,00,000 indirect jobs in Chandigarh. The Entrepreneur Development Centre at the RGCTP is being set up over an area of 1.5 acre approximately. The centre would become operational this year.

Chandigarh has become a role model in using information technology to provide fast and user friendly services for the masses. Under the E-Governance initiatives of the Department, seven more Gram Sampark Centres have been set up in the villages of Dhanas, Khudda Jassu, Kaimbwala, Raipur Khurd, Raipur Kalan, Makhan Majra and Bahlana. As many as seven more Gram Sampark Centres in villages Palsora, Dadu Majra, Hallo Majra, Khuda Alisher, Daria, Mauli Jagran and Maloya have been made operative.

In addition to the existing Centres some more Sampark Centres have been proposed and new services like payment of BSNL bills, power bills, water bills, payment of LIC premium, school fees collection and tubewell booking, especially for rural citizens , have also been incorporated or are being afoot.

The Administration is working on energy conservation. A Work order has been issued to the Tata BP Solar Ltd. for commissioning the State Level Energy Park at the Botanical Garden. Under the Solar Lighting initiative, all street lights in the villages would be replaced with solar based street lights.

Provision of sufficient electricity to all the residents of UT is also getting attention of the Administration. To improve the voltage profile and to reduce the load on the power distribution network of UT, the Electricity Wing had planned to add 80 MVAR Automatic Capacitor Banks at various existing 66KV Grid Sub-Stations located at different points in the periphery of UT.

Use of CFL has been made mandatory inside all government buildings. Similarly, all institutional buildings will have to provide solar lighting in their parking spaces within their complexes.

The Electricity Wing also achieved its target in reduction of transmission and distribution losses from 20.89% to 19.29%. The reduction is around 1.5%. Every effort is being made to reduce the losses further in the next year by another 1.5%.

In order to sensitize the poor and weaker sections of the society about the rights and different benefits being extended to them by the State Legal Services Authority, 14 legal awareness seminars have already been organized in different villages of the UT.

The Administration has opened a Girls Hockey Academy in sector-18 and would shortly start two more girls academies — one for Cricket and another for Football.

Social Welfare has been a major focus of the Administration. Many people-friendly and innovative schemes for them have been launched by Administration. To wipe out the menace of casteism and encourage the people for inter-caste marriage, a sum of ? 5,000 was granted to the married couples provided that one of the spouses belongs to SC Community. Now the Administration has enhanced the amount to Rs.50,000.Under the Balika Samridhi Yojana, a sum of ? 500 is being given to the newly born girl child in the BPL families. The Chandigarh Administration has decided to set up a Preparatory School for Children with Special Needs (for 50 children) which will run in the premises of PRAYAS Building, Sector 38.

The Vocational Training Centre for Street Children in Maloya with the capacity to provide training for 900 children is under construction. The Administration has set up a child help line.

Telemedicine Project has been launched with the State-of-art facilities at Government Medical College and Hospital, Sector 32, Chandigarh aiming to help needy patients to avail the expert advice of the doctors of specialized fields in PGI and ensuring them high-quality medical services.The Government Multi Speciality Hospital (GMSH), Sector 16 has been upgraded by adding a Trauma Unit having 28 beds with Emergency Operation Theatres.

The Administration has launched the project for improving the Monitorable Indicators of Reproductive and Child Health in UT at a cost of Rs. 5,273 per mother and her child.

Seven more "State-of-the-art" operation theatres including pre-anesthesia, post-anesthesia rooms and a post operative ward have been commissioned in Government Medical College and Hospital, Chandigarh. "SAMARTH" a residential house for mentally retarded individuals had also been set up in Sector 15, Chandigarh. A total of around Rs. 5.6 crore has been sanctioned for the Residential Accommodation of the eligible faculty staff of GMCH.

Chandigarh Administration is coming up with its World Class Project, the multi institutional 'Chandigarh Education City' at Sarangpur with a total area of 130 acres.

It has been decided to increase the scholarship to the meritorious SC/ST students of Classes 9th to 12th; it has been now increased to Rs. 300 per month whereas it was ? 20/- and Rs. 25/- earlier.

Chandigarh Administration has also decided to exempt the tuition fees of Muslims, Christians, Other Backward Classes, Handicapped, Ward of Freedom Fighters, Ex-serviceman, widows and divorcees having family income below Rs.1.5 lakh per year. For the children belonging to low income groups and slum based families, it has decided to give incentive of Rs.250 per month to rope in the children presently not enrolled in any school on their fresh enrolment.

Administration has taken many innovative and novel measures like Wedding Tourism. With the focus on extending efficient medical, educational and entertainment oriented facilities, Administration is promoting Cinematic Tourism, Sports Tourism and Medical Tourism in a big way. Chandigarh International Airport will prove to be a big leap for Tourism in the region.

Municipal Corporation Chandigarh has upgraded the Sewage Treatment Plant at Diggian at a cost of Rs. 28 crore. MC also bagged the 1st prize both in water supply and sewage/drainage services from the Government of India, which was awarded by the Prime Minister of India.A Supervisory Control and Data Acquisition System has been installed at a cost of Rs. 700 crore to keep surveillance and monitor the water supply. It will save power consumption, reduce operation and maintenance cost by approximately Rs. 3 crore annually.

To save potable water and provide additional water for landscaping, a project amounting to Rs.36 crore has been taken up. This project will generate 10 MGD tertiary water. The existing Dhobi Ghat of Sector 15 has been converted into Automatic Laundry Marts, the first of its kind in India.

Adding another milestone to up-gradation of the environment in City Beautiful, The Municipal Corporation has set up a Solid Waste Processing Plant at Dadu Majra at a cost of Rs. 30.00 crore on 10 acres. The plant is one of its kind in northern India.

Chandigarh Administration comprehending the need for a user friendly transport system has decided to launch a Mass Rapid Transport System shortly. The UT Administration and the State Governments of Punjab and Haryana have come together for the implementation of the project.