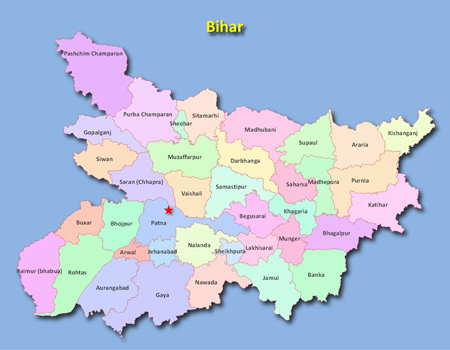 Bihar finds mention in the Vedas, Puranas, epics, etc., and was the main scene of activities of Buddha and the 24 Jain Tirthankars. Great rulers of the State before the Christian era were Bimbisar, Udayin, who founded the city of Pataliputra, Chandragupta Maurya and Emperor Ashoka of Maurya dynasty, the Sungs and the Kanvas. Then came the Kushan rulers followed by Chandragupta Vikramaditya of the Gupta dynasty. Muslim rulers made inroads into the territory during the medieval period. The first conqueror of Bihar was Mohammed- bin-Bakhtiar Khalji. The Tughluqs and then the Mughals followed the Khaljis.

One of the major states of the Indian Union, Bihar is bounded on the north by Nepal, on the east by West Bengal, on the west by Uttar Pradesh and on the south by Jharkhand. Bihar has a number of rivers, the most important of which is the Ganga. The other rivers are the Sone, Poonpoon, Falgu, Karmanasa, Durgawati, Kosi, Gandak, Ghaghara, etc.

Major Industries are: Railway Wagon Plants of Bharat Wagon Limited at Muzaffarpur and Mokamah; Oil Refinery of Indian Oil Corporation at Barauni; Fertilizer Manufacturing Plant of HPCL at Barauni and PPCL at Amjhor; Cotton Spinning Mills at Siwan, Pandaul, Bhagalpur, Mokamah and Gaya; 13 sugar mills in private sector and 15 in the public sector located in south and north Bihar with a total crushing capacity of 45,000 TPD. In addition, distilleries at Gopalganj, West Champaran, Bhagalpur and Riga (in Sitamarhi district); Finished Leather Industry in West Champaran, Muzaffarpur and Barauni; Jute Mills at Katihar and Samastipur; Medicine Manufacturing Unit at Hajipur; Food Processing Units as also Vanaspati Manufacturing Units at Aurangabad and Patna; besides Kalyanpur Cement Limited at Banjari, are notable in the industrial map of Bihar.

Railways: Bihar has a fairly good railway network. There is a railway bridge at Mokamaha in north Bihar. A few railway routes connecting important places like Muzaffarpur-Samastipur-Barauni-Katihar and Muzaffarpur-Chapra-Siwan have been converted into broad gauge. The main rail junctions are at Patna, Gaya, Muzaffarpur, Katihar and Samastipur, etc.

Aviation: There is an international airport at Patna, besides landing grounds in all major districts of the State.