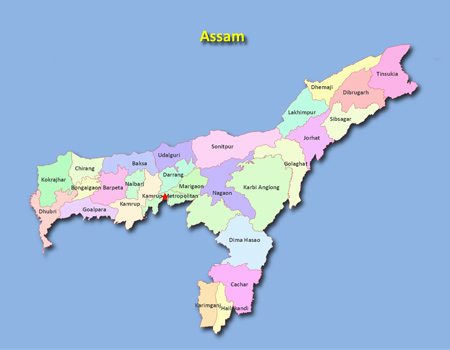 The word 'Assam' as interpreted by some scholars is derived from the Sanskrit word Asoma meaning peerless or unparalleled. But the widely accepted opinion of the academic circles today is that the term has come from the original name of the Ahoms, who ruled the land for about six hundred years prior to its annexation by the British. The races like Austric, Mongolian, Dravidian, and Aryan that came to this land long ago have contributed to its composite culture. Thus Assam has a rich legacy of culture and civilization.

Assam was known as Pragjyotisha or the place of eastern astronomy during the epic period and later named Kamrupa. The earliest epigraphic reference to the kingdom of Kamrupa is found in the Allahabad pillar inscription of king Samudragupta. Kamrupa is mentioned as a Pratyanta or frontier state outside the Gupta empire but with friendly and subordinate relation to it. Hiuen Tsang, the Chinese scholar pilgrim who visited Kamrupa in about 743 AD on an invitation of its monarch, Kumar Bhaskar Varman, left a record of the kingdom he called Kamolupa. Kamrupa also figured in the writings of the Arabian historian Alberuni in the eleventh century. Thus, from the epic period down to the twelfth century AD, the eastern frontier kingdom was known as Pragjyotisha, and Kamrupa and kings called themselves 'Lords of Pragjyotisha'.

The advent of the Ahoms across the eastern hills in 1228 AD was the turning point in Assam history. They ruled Assam nearly for six centuries. The Burmese entered through the eastern borders and overran the territory at a time when court intrigues and dissensions were sapping the vitality of the Ahom royalty. It became a British protectorate in 1826 when the Burmese ceded Assam to the British under the provision of the Treaty of Yandabo.

Assam is known for her rich forest wealth which constitutes 26.22 percent of the total forest area.

The State has five National Parks and eleven wildlife sanctuaries. The Kaziranga National Park and the Manas Tiger Project (National Park) are internationally famous for the one-horned Rhino and Royal Bengal Tiger respectively.

Of agriculture-based industries, tea occupies an important place. There are six industrial growth centers in the State and two such centers are being set up at Balipara and Matia. Presently four oil refineries have been working in the State including the one at Digboi. Construction of the Export Promotion Industrial Park (EPIP) at Amingaon near Guwahati is nearing completion. A Software Technology Park will be constructed at Borjhar near Guwahati. A Central Institute for Plastic Engineering Technology (CIPET) has been established at Amingaon near Guwahati. Assam has always enjoyed the highest reputation for the arts and crafts associated with her cottage industries. Cottage industries include handloom, sericulture, cane and bamboo articles, carpentry, brass, and bell-metal crafts. Assam produces varieties of silk, Endi, Muga, Tassar, etc. Muga silk is produced only in Assam in the world.

The major power stations are Chandrapur Thermal Project, Namrup Thermal Project, and a few Mobile Gas Turbine Units along with a mini hydroelectric project. Revitalizing the Thermal Power Station of Bongaigaon and the ongoing Karbi-Langpi Project will boost the power supply in the State.

Roads: The total length of roads in the State is 37,515 km which includes 2,836 km of National Highways. The construction of 160 km of barbed wire fencing and 27 km of the border road along the Indo-Bangladesh International Border have been completed.

Assam has an exclusive range of colourful festivals. Bihu is the chief festival celebrated on three occasions. Rongali Bihu or Bohag Bihu marks the advent of the cropping season and it also ushers in the Assamese New Year. Bhogali Bihu or Magh Bihu is the harvest festival and Kati Bihu or Kongali Bihu coming in autumn is a simple affair.