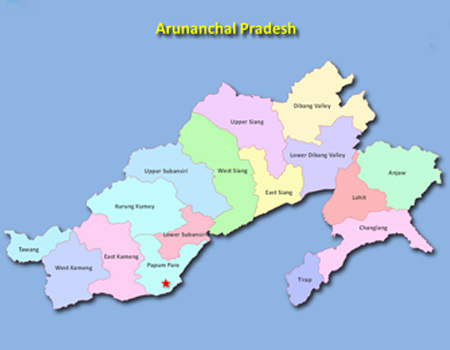 Arunachal Pradesh became a full-fledged State on 20 February 1987. Till 1972, it was known as the North-East Frontier Agency (NEFA). It gained the Union Territory status on 20 January 1972 and renamed Arunachal Pradesh.

On 15 August 1975, an elected Legislative Assembly was constituted and the first Council of Ministers assumed office. The first general election to the Assembly was held in February 1978.

Administratively, the State is divided into sixteen districts. The capital of the State is Itanagar in Papum Para district. Itanagar is named after Ita fort meaning fort of bricks, built-in 14th century AD. Arunachal Pradesh finds mention in the literature of Kalika Purana and Mahabharata. This place is the Prabhu Mountains of the Puranas.

It was here that sage Parashuram atoned for his sin, sage Vyasa meditated, King Bismaka founded his kingdom and Lord Krishna married his consort Rukmini. The widely scattered archaeological remains at different places in Arunachal Pradesh bear testimony to its rich cultural heritage.

Some of the important festivals of the State are Mopin and Soiling of the Adis, Lossar of the Monpas, Boon-boot of the Hill Miris, Sherdukpens, Dree of the Apatanis, Si-Donyi of the Tagins, Reh of the ldu-Mishmis, Nyokum of the Nishis, etc. Animal sacrifice is a common ritual in most festivals.

Agriculture is the mainstay of the people of Arunachal Pradesh and mainly depends on jhum cultivation. Encouragement is being given to the cultivation of cash crops like potatoes and horticulture crops like apples, oranges, and pineapples.

For conservation and exploration of the vast minerals, the Arunachal Pradesh Mineral Development and Trading Corporation Limited (APMDTCL) was set up in 1991. Namchik-Namphuk coal fields are taken up by APMDTCL. To provide training to craftsmen in different trades there are two Industrial Training Institutes at Roing and Daporijo.

Roads: Arunachal Pradesh has 330 km of the national highway.

The Arunachal Pradesh State Election Commission in support of State Govt. has successfully conducted and completed Panchayati Raj Elections in the State in the month of May 2008 for speedy development in the village and grass-root level.