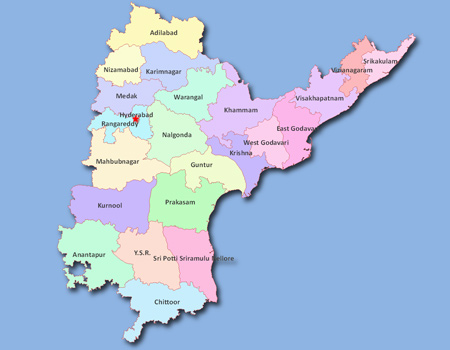 The earliest mention of the Andhras is said to be in Aitereya Brahmana (2000 BC). It indicates that the Andhras, originally an Aryan race living in north India migrated south of the Vindhyas and later mixed with non-Aryans. Regular history of Andhra Desa, according to historians, begins with 236 BC, the year of Ashoka's death. During the following centuries, Satavahanas, Sakas, Ikshvakus, Eastern Chalukyas, and Kakatiyas ruled the Telugu country. Other dynasties that ruled over the area in succession were the kingdoms of Vijayanagar and Qutub Shahi followed by Mir Qumruddin and his successors, known as the Nizams. Gradually, from the 17th century onwards, the British annexed territories of the Nizam and constituted the single province of Madras. After Independence, Telugu-speaking areas were separated from the composite Madras Presidency and a new Andhra State came into being on 1 October 1953. With the passing of the States Reorganisation Act, 1956, there was a merger of Hyderabad State and Andhra State, and consequently, Andhra Pradesh came into being on 1 November 1956.

Andhra Pradesh is historically called the Rice Bowl of India. The state has a large river system that supplements the rainfall in the state. It is one of the few states in the country blessed with riverine geography.

Andhra Pradesh is bounded on the north by Orissa and Chhattisgarh, on the west by Maharashtra and Karnataka, on the south by Tamil Nadu, and on the east by the Bay of Bengal with a coastline of 974 km.

Agriculture is the main occupation of about 62 percent of the people in Andhra Pradesh. Rice is a major food crop and staple food of the State contributing about 77 percent of the foodgrain production. Other important crops are jowar, bajra, maize, ragi, small millets, pulses, castor, tobacco, cotton, and sugarcane. Forests cover 23 percent of the State's area. Important forest products are teak, eucalyptus, cashew, casuarina, bamboo, softwood, etc.

The Government is working with a mission of "Sustainable Agriculture Production with a minimum cost of cultivation, eventually enhancing the return on income to the farmer." In the process of making the mission a reality, the Government is implementing schemes for the welfare of farmers like 9 hours free power supply, subsidized seed, the subsidized interest rate on crop loans, subsidized and quality agricultural inputs, etc. Andhra Pradesh occupies the first position in respect of agricultural loans from commercial and cooperative banks. The debt waiver scheme of the Central Government and the incentive scheme of the State Government have helped about one crore farmers in the state to the tune of? 16,000 crore. The Government of Andhra Pradesh is also keen on introducing cooperative farming to set up farm yields.

A total of 86 projects (44 Major+30 Medium-i-4 Flood Banks Modernisation) have been taken up under the Jalayagnam program, with the aim of completing the ongoing and new projects in a record time to provide immediate irrigation to water-starved areas on top priority by mobilizing funds from all possible sources.

Andhra Pradesh is well known globally for its variety of rocks and minerals and is called Ratna Garbha. Andhra Pradesh has the largest deposits of quality chrysolite asbestos in the country. Other important minerals found in the state are copper ore, manganese, mica, coal, and limestone. The Singareni Coal Mines supply coal to entire south India. Mineral consumption is increasing due to the promotion of various industries and the manufacture of mineral-based products. The state produces about 100 to 110 million tonnes of industrial minerals and 200 million cubic meters of stone and building material AP stands first in Barytes and Limestone production in the country The state stands first in value of minor mineral production and second in the total value of mineral production in the country contributing about 9 to 10% to the country's mineral value production. The state stands first in mineral revenue among the important Mineral Producing states of the country.

The Government has introduced an innovative, unique, self-financed housing scheme "Rajiv Swagruha" for the moderate-income group in the state with an objective that every person with moderate income in the state having no house of his/her own must have a house at affordable cost in the urban/municipal areas in the state. The houses/flats have to be made available to them at prices 25% less than the existing market rates on similar specifications. The construction of the housing program under Rajiv Swagruha is in progress.

'Rajiv Arogyasri' is a unique health insurance scheme being implemented in Andhra Pradesh. The scheme enables the poor, suffering from chronic diseases, to undergo treatment costing up to Rs 2 lakh. All white cardholders can undergo treatment for about 942 diseases. Medical and surgical treatment is provided in 344 corporate, private, and Government hospitals free of cost to patients. Aarogyasri scheme is unique in its applicability since no other state/government agency has provided universal health coverage to the poor for major ailments. The choice of hospital for treatment is with the patient. The entire process from the time of conduct of health camps to the screening, testing, treatment, follow-up, and claim for payment is made transparent through online web-based processing to prevent any misuse and fraud. This system is motivating more and more Government hospitals to participate in the scheme and utilize the revenue earned to improve facilities to provide quality medical care and thus bring reforms in tertiary medical care. Officials from several states have visited the state and appreciated the scheme.

Andhra Pradesh has been forging ahead in the sphere of Information Technology It is ahead of other states in exploiting the opportunities to the hilt. The State Government has introduced many schemes to utilize the maximum number of skilled human resources in the I.T. Sector.

Aviation: Important airports in the State are located at Shamshabad, Tirupathi, and Visakhapatnam. International flights are operated from Shamshabad.

Ports: There is one major Port at Visakhapatnam under the Government of India and 13 Non-Major Ports under the State Government. Ports offer tremendous potential for development and for the growth of a wide spectrum of maritime activities such as international shipping, coastal shipping, ship repair, fishing, captive ports for specific industries, all-weather ports, tourism, and sports, etc.

Andhra Pradesh Tourism Development Corporation continues to strive for the promotion of new tourism products such as Eco-tourism, Beach-Tourism, and Cruise-Tourism. The Corporation currently runs a chain of 52 hotels with 1043 rooms and 2222 beds in prime locations fostering a homely ambiance. An impressive fleet of 144 buses caters to varied tour packages connecting important tourism locations within and outside the state.