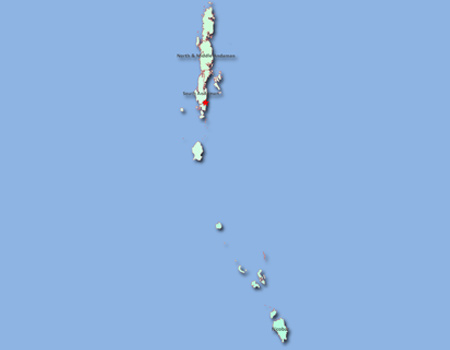 The Union Territory of the Andaman and Nicobar Islands, is situated between 6° and 14° North Latitude and 92° and 94° East Longitude. The islands located north of 10° north latitude are known as Andaman Group of Islands while islands located south of 10° north latitude are called Nicobar Group of Islands. The climate of the islands can be defined as humid, tropical coastal climate. The Islands receive rainfall from both the south-west and north-east monsoons and maximum precipitation is between May and December.

The original inhabitants of the Islands lived in the forests on hunting and fishing. There are four Negrito tribes, viz., the Great Andamanese, Onge, Jarawa and Sentinalese in the Andaman group of Islands and two Mongoloid tribes, viz., Nicobarese and Shompens in the Nicobar group of islands.

Paddy, the main food crop, is mostly cultivated in Andaman group of Islands, whereas Coconut and Arecanut are the cash crops of Nicobar group of Islands. Field crops, namely, pulses, oilseeds and vegetable are grown followed by paddy during Rabi season. Different kinds of fruits such as mango, sapota, orange, banana, papaya, pineapple and root crops are grown on hilly land owned by the farmers. Spices, viz. pepper, clove, nutmeg and cinnamon are grown under multitier cropping system. Rubber, red oil, palm and cashew are grown on a limited scale in these Islands.

There are 1833 registered MSMEs and Handicrafts Units. Two units are 100 per cent export oriented units in the line of Fish/Prawn processing activity. Apart from this, there are shells and wood based handicraft units. SSI units are engaged in the production of paints and varnishes, mini flour mills, soft drinks and beverages, steel furniture and fixtures, ready made garments, steel gate grills and structures. MSMEs handicraft units are also engaged in shell crafts, bakery products, rice-milling, furniture-making, etc. The Andaman and Nicobar Islands Integrated Development Corporation in the Public sector has spread its wings in the field of Tourism, Fisheries, Industries and Industrial financing and functions as authorized agents for Alliance Air/Jet Airways/ Air Deccan.

The Motor Transport Department of A & N Administration operates from 13 stations in Northern and Southern group of Islands. The department has a total number of 205 buses in operation mainly in rural area of A & N Islands. Computerized ticketing for ATR express service has been implemented w.e.f. 15 August 2007 where advance tickets can be obtained.

Andaman and Nicobar Islands have been recognised as an eco-friendly tourist's destination. As a tourist paradise, these Islands have something very special to offer like historic Cellular Jail, Ross Island and Havelock Island.

As regards the connectivity, the islands are well connected to the mainland by air and sea. Indian Airlines, Air Deccan, Jetlite operates to Port Blair from Kolkata and Chennai. There are regular passenger ship services from Chennai, Kolkata and Vishakhapatnam.

There are 96 Wildlife Sanctuaries, 9 National Parks and 1 Biosphere Reserve in these Islands. Mammals - out of 55 terrestrial and 7 marine mammal species reported so far, 32 species are endemic. Birds - as many as 246 species and sub -species of birds are reported to inhabit these Islands and of these 99 species and sub-species are endemic. Reptiles - there are 76 terrestrial reptiles found here, of these, 24 species are endemic. Marine Life - Islands harbour more than 1,200 species of fish, 350 species of echinoderms, 1,000 species of molluscs and many more lower forms of life. Among vertebrates dugongs, dolphins, whales, saltwater crocodiles, sea turtles, sea snakes, etc., are common. Coral and Coral reefs - so far 179 species of corals belonging to 61 genera have been reported. Reefs are mostly fringing type on eastern coast and barrier type on the western coast.